NERC: high probability of insufficient resources to meet electricity demand as early as Summer 2022 in parts of US

Findings from the North American Electric Reliability Corporation’s (NERC’s) 2021 Long-Term Reliability Assessment (LTRA) indicate there is a high probability of insufficient resources and energy to serve electricity demand, as early as Summer 2022, in many parts of the Western Interconnection.

Extreme weather-related events and performance issues associated with some inverter-based resources, such as solar, wind and new battery or hybrid generation, may also have a potential negative impact on reliability. 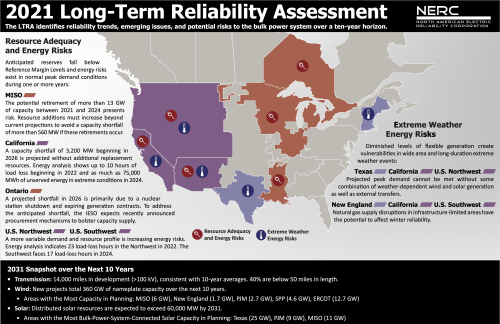 The LTRA identifies a significant projected increase in variable generation and emphasizes the criticality of the role of natural gas as a balancing resource. More transmission is also needed to deliver renewable energy from remote locations to load centers, but the LTRA acknowledges that build-time and siting are additional constraints that need to be considered in planning and policy setting.

While the LTRA finds that all interconnections will face increasing reliability issues over the next 10 years, California, parts of the northwestern and southwestern United States and the Midcontinent Independent System Operator (MISO) areas, in particular, are projecting capacity shortfalls and periods of insufficient energy due to declining reserve margins and generator retirements.

Texas, California and the Northwest United States project that peak demand cannot be met without some combination of variable generation and imports. In addition, natural gas infrastructure that supports electricity generation in New England, California, and the southwestern United States is susceptible to disruptions that can affect winter reliability. Regional coordination and resource adequacy planning among entities in these at-risk regions is strongly encouraged.

As our system’s resource mix changes, so does the need to use different assessment approaches to identify reliability risk. Focusing only on the resource needs for expected peak electricity demand in summer or winter could neglect other risk periods, such as when variable generation is not producing as much energy as expected. Resource planning needs to ensure that system operators have at their disposal sufficient generation that can be dispatched to deliver needed energy at all hours of the day and in all seasons.

NERC provides specific areas of focus for the Electric Reliability Organization (ERO) Enterprise, stakeholders and policymakers in the assessment.

The 2021 LTRA is the ERO Enterprise’s independent assessment and comprehensive report on the adequacy of planned bulk power system resources to meet electricity demand across North America over the coming decade. It also identifies area trends and emerging issues that affect the long-term reliability and security of the grid.

The North American Electric Reliability Corporation (NERC) is a not-for-profit international regulatory authority the mission of which is to assure the effective and efficient reduction of risks to the reliability and security of the grid. NERC develops and enforces Reliability Standards; annually assesses seasonal and long‐term reliability; monitors the bulk power system through system awareness; and educates, trains, and certifies industry personnel.

Focusing attention on energy sufficiency with the understanding that capacity alone does not provide for reliability unless the fuel behind it is assured, even in extreme weather.

This is EXACTLY what the Trump administration attempted to do with its proposed stored-fuel rule, but it was shot down.  The need was blatantly obvious, yet it was ignored.

Rethinking the regulatory structure and oversight of natural gas supply for electric generation and its role in supporting the reliable operation of the bulk power system.

About time.  If a plant wants to bid into capacity markets, it should be required to have guaranteed fuel delivery.

The stored-fuel rule is an archaic way to go with the possible alternatives.
WHAT ABOUT SMART DEMAND!!! EVERY power consumer must be notified of pending outages. Shortage Prices need to incentivize this also.
Where is the state and federal leadership in this area?
This is another reason to massively build out HVDC grid.

The stored-fuel rule is an archaic way to go with the possible alternatives.

It's the only thing that's proven to work.  And it gives nuclear energy full credit for providing reliability.


WHAT ABOUT SMART DEMAND!!! EVERY power consumer must be notified of pending outages.

Do you not realize that OUTAGES ARE DAMAGING REGARDLESS OF ADVANCE KNOWLEDGE?!  If you have an outage in the middle of a winter cold snap, your pipes are going to freeze whether you were notified or not.  Sewage is going to back up when lift pumps stop.  Treated water will become dangerous when the system pressure falls and allows contaminated groundwater to seep in.  PEOPLE ARE GOING TO DIE.

Incentivize even MORE dependence upon unreliable, harmful energy?  I stumbled across this list of deceptions about wind energy:


Where is the state and federal leadership in this area?

State governments in New York and California are closing their cleanest, most reliable generators for ideological reasons.  Some "leadership".  Everyone responsible should be on trial for crimes against humanity.


This is another reason to massively build out HVDC grid.

Without reliable power to feed into it, it would accomplish nothing useful.