The largest asset-based transportation company in Europe, Girteka Logistics, was one of the first road freight transport companies to be given the Green Carrier Certificate by one of its partners, DHL. (Earlier post.) The certificate was established by the German-based logistics company to certify its subcontractors, increasing the transparency behind its sustainability goals for its stakeholders. 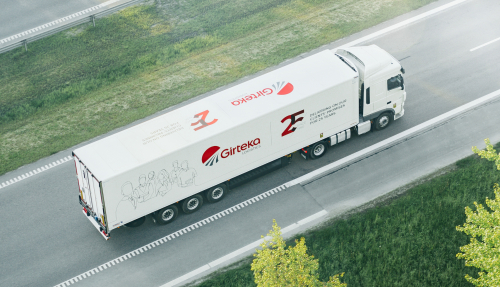 DHL surveyed more than 600 selected service partners from Germany, Belgium, Spain, and the Netherlands on their sustainability performance, and according to the company, Girteka Logistics was one of the first companies to receive the certificate.

Girteka Logistics has continuously attempted to be the leader in decarbonizing its road transport services, as the transport provider has operated a very young fleet of trucks powered by the latest Euro 6 diesel standard engines across its vehicle park.

In addition, the company, together with its partners, has looked to utilize Hydrotreated Vegetable Oil (HVO) and intermodal train solutions that reduce the CO2 emissions of road transport by up to 85% and 90%, respectively.

Girteka Logistics, together with other European Clean Trucking Alliance (ECTA) members, welcomed the ‘Fit for 55’ legislative package by the European Commission (EC), which aims to reduce the bloc’s emissions by at least 55% by 2030 compared to 1990 levels.