ÖBB Postbus in Austria has ordered five hydrogen buses from Solaris. has landed a deal with Solaris for the delivery of five hydrogen buses. The hydrogen-fueled vehicles will be deployed in the picturesque city of Villach in south-east Austria.

This is the first order placed under a framework agreement concluded at the beginning of 2021 and envisioning the option for the purchase of up to 40 vehicles of this type by the customer. The investment coincides with the execution of the H2 Carinthia project which aims to foster the development of hydrogen technology in this region.

The use of hydrogen in transport provides a real opportunity to reduce emissions generated by this sector. Public transport operators and municipal authorities in the Austrian province of Carinthia wish to tap into this potential. The H2 Carinthia project aims to support the development of the region in terms of the use of hydrogen in public transport and for industrial purposes. The participants include the largest carriers in Austria, city authorities and energy firms.

This project will cover, among others, the first hydrogen-fueling station of Carinthia, as well as the addition of hydrogen-fueled vehicles to existing bus fleets.

At the beginning of 2021 Solaris entered a framework agreement with carrier ÖBB Postbus, stipulating the possibility of the purchase of up to 40 hydrogen buses by 2023. In December 2021, the carrier took advantage of that option, placing an order for 5 units of the Solaris Urbino 12 hydrogen model. The bus can cover a distance of about 350 km completely emission-free under all kinds of conditions. Solaris will deliver the vehicles by the end of November 2022.

In spring this year, the hydrogen-fueled, zero-emission Urbino 12 hydrogen was on display and was doing test runs in Carinthia, including Villach itself. 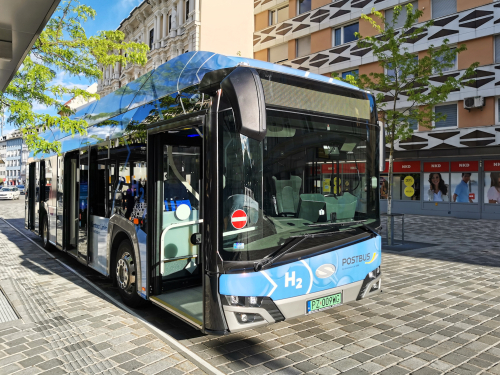 The representatives of regional authorities and of transport operators were therefore able to take a very close look at the technology used in this vehicle. After test rides in Carinthia, the presentation of the hydrogen Solaris was continued in the province of Upper Austria.

ÖBB Postbus is the biggest bus operator in Austria. One of the chief aspects of its business operation is the testing of alternative propulsion technologies based on, for example, hydrogen or electric power. The partnership between Postbus and Solaris dates back to 2009, and right now Postbus operates some 169 vehicles of the Urbino model. The contract signed at the beginning of December is the first one though concerning alternative drive buses.

I ave trouble understanding why anyone would operating Hydrogen Fuel Cell transit buses when Battery Electric would cost less to operate and be more energy efficient. I might understand operating long range fuel cell intercity buses or long range trucks but transit buses?

The fossil companies want to continue their dominance of the energy markets by making H2 from fossil fuels using the gross polluting process of reforming. They are buying off politicians and pushing hard to create hydrogen usages anywhere they can, even if it makes no sense.