Sumitomo Corporation will launch a full-scale project to design and develop an ammonia-fueled dry bulk carrier jointly with Oshima Shipbuilding Co., Ltd. The ship is expected to be 229m in length, with a beam of 32m and deadweight of 80,0000-81,000MT. Speed is to be 14.3 knots. 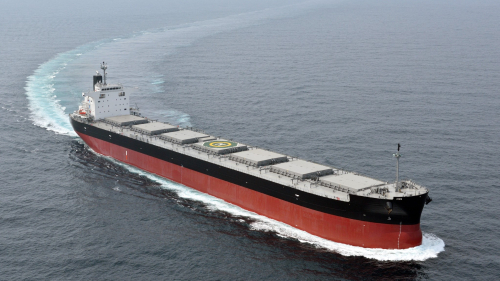 A dry bulk carrier of an equivalent size to that of the ammonia-fueled carrier to be built.

In response, companies in the maritime industry are required to replace the fuels for their ships with ammonia, hydrogen and other substitutes with low environmental impact, and to introduce the equipment that will help them reduce their GHG emissions. As ammonia can be liquefied more easily than hydrogen, the substance is attracting much attention as a substitute fuel for ocean-going ships that navigate a long distance at one time.

Oshima Shipbuilding has been manufacturing and selling dry bulk carriers jointly with Sumitomo Corporation since 1973. The shipbuilder has a large production capacity backed by its long-accumulated technologies and expertise. Sumitomo Corporation, jointly with this shipbuilder, will work on the design and development of an ammonia-fueled dry bulk carrier toward completing the ship within 2025.

Sumitomo Corporation will design and develop the bulk carrier, improve the navigation environment, and ensure the supply of ammonia as fuel, in cooperation with Oshima Shipbuilding and other external partners as well as with the involvement of the internal cross-organizational project team for ammonia, which was launched within Sumitomo Corporation this July.

After the completion of the bulk carrier, Sumitomo Corporation will own and operate it, thereby helping users of the ship’s transportation service to reduce their GHG emissions across their supply chains.

Keppel. Since this March, jointly with external partners, Sumitomo Corporation has been examining the launch of an ammonia supply business to fuel ships in Singapore. In addition to building an ammonia supply chain, the company is making adjustments with the Singaporean government for the formulation of operation guidelines and the establishment of the necessary regulations.

Now, Sumitomo and Keppel FELS, a wholly-owned subsidiary of Keppel Offshore & Marine Ltd have signed a Memorandum of Understanding to explore the feasibility and implementation of various ammonia fuel applications in Singapore.

They're both for the birds.

Ammonia is a lot better than LH2