Uranium Energy Corp. (UEC) recently acquired all of the issued and outstanding shares of Uranium One Americas (U1A), Inc. for a total purchase price of $112 million in cash together with an additional $2.9 million in estimated working capital (primarily pre-paid insurance and land payments) and the assumption of $19 million in reclamation bonding. Uranium One is the world’s fourth-largest uranium producer and part of Russia’s State Atomic Energy Corporation, Rosatom.

The U1A portfolio of projects being acquired includes, among other assets, seven projects in the Powder River Basin, three of which are fully permitted, and five in the Great Divide Basin. The portfolio consists of dozens of under-explored, mineralized brownfield projects, backed by detailed databases of historic uranium exploration and development programs, thus greatly enhancing the potential for resource expansion. 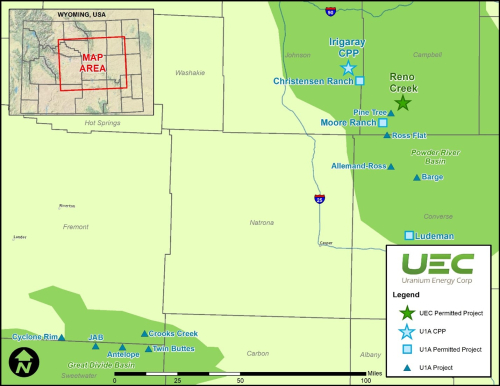 We are very pleased to have closed this highly accretive transaction for UEC. The acquisition doubles our production capacity in three key categories: total number of permitted US ISR [in-situ recovery] projects, resources, and processing infrastructure. Also, the opportunity to have acquired an advanced asset base of this quality from one of the global leaders in the nuclear energy industry is highly unique.

With this acquisition, UEC’s sector-leading US ISR production profile increases to 6.5 million pounds U3O8 per year based on permitted and installed capacity of our Wyoming and South Texas hub-and-spoke operations. Combined with our physical uranium holdings of 4.1 million pounds of US-warehoused uranium, we now have the unparalleled ability to provide reliable domestic supply to the US Government as well as nuclear utilities while providing our shareholders exposure to the fastest growing, 100% unhedged and pure-play uranium business listed on the NYSE American.

ISR is injected-solution mining that reverses the natural process that deposited the uranium in the sandstones. On-site ground water is fortified with gaseous oxygen and introduced to the uranium ore body through a pattern of injection wells. The solution dissolves the uranium from the sandstone host.

The uranium-bearing solution is brought back to surface through production wells where the uranium is concentrated on resin beads for trucking to the company’s Hobson Processing Plant to be concentrated further and dried into yellowcake for market. This pattern of injection and recovery wells, plus surrounding monitor wells that serve as a safeguard, is called a wellfield.

The U1A assets are primarily situated in the Powder River Basin of Wyoming; the most productive in-situ recovery uranium mining district in the western hemisphere. Other highlights of the acquisition include the following:

UEC has outlined several initiatives to integrate the U1A assets into the UEC portfolio. They include:

Uranium Energy Corp is a US-based uranium mining and exploration company that is advancing the next generation of ISR mining uranium projects. In South Texas, the company’s hub-and-spoke operations are anchored by the fully-licensed Hobson Processing Facility which is central to the Palangana, Burke Hollow, Goliad and other ISR pipeline projects.

In Wyoming, UEC controls the Reno Creek project, which is the largest permitted, pre-construction ISR uranium project in the US.

Investing time, effort and financial resources in an uranium enterprise is as useless as searching and drilling for oil or coal mining.

The Chinese and Russians sure don't think so, and all of the actual decarbonization success stories have relied on hydro, nuclear or both.

I surely would not idolize the Chinese or Russians in any aspect. With the exception of a few Russians or Chinese that could be counted off on one hand, the whole of humanity would be better off without either one. As far as predatory capitalism is concerned , the Chinese are leading in front of the Russians. Several decades ago, the following saying was quite prevalent: a communist is someone who is tracking a capitalist to get his wallet. I.O.W. I could care less what the Chinese or Russians propagate, as long as they leave others alone. In the view of reality that option appears to be rather slim.

Russia has been exporting nuclear reactors for some time; Finland looks to be going with a VVER build instead of another EPR.  Poland of all places is looking to SMRs to decarbonize its coal-heavy grid.  The UK still intends to build out more nuclear.

Aside from a few places where insanity reigns, like Germany and Austria, nuclear energy is becoming increasingly popular as the best GHG-free energy technology available.

When Galileo claimed that the world was a sphere and a satellite of the sun and not the center of the universe, the whole world - especially the Vatican held him to be insane and threatened him with death unless he revoked his insane theories.

I do not pretend to understand the current economics of mining uranium but I will state that the single largest component of green electric production in the United States is nuclear with 19.7% of total electric production compared to 8.4% for wind, 7.3% for hydro, 2.3% for solar, 1.4% for biomass, and 0.4% for geothermal. My numbers are from 2020 as it is a bit early for 2021 numbers. I am not sure that I would include all of the biomass contribution as "green" but even if you do, the nuclear component is about equal to the total of all of the other contributions. Personally, I would like to see the nuclear power component grow as it it is most reliable, safest, and uses the least amount of land.

I am hopeful that TerraPower will eventually be able to be able to bring their traveling wave reactor to fruition. This will mostly eliminate the need for enriched uranium as it only needs a small amount of enriched uranium to state the reaction and then will burn existing nuclear waste, natural uranium, or even depleted uranium . We already have enough stored depleted uranium to provide 100% of our current electric power production for about 700 years. See:
https://www.terrapower.com/our-work/traveling-wave-reactor-technology/

Apparently, TerraPower is going to build a next gen sodium fast reactor combined with a molten salt energy storage system which they refer to as Natrium technology. See: https://www.terrapower.com/natrium-reactor-reality-2021/

@yoatmon, I am not sure what this has to do with Galileo's understanding of science and reality.

@ sd:
This has nothing to do with Galileo's understanding of science and reality. It is solely intended to show that a single conviction - really correct - is almost impossible to convince a majority heading towards a questionable direction.
I can hear all those promises of salvation bound to nuclear fission but alas I haven't the slightest trust in them.
Perhaps you can recall the fable of the boy herding the sheep who called the alarm "wolf" once to often.
I would trust fusion but no way fission. Fission is "clean" while producing energy, but is inherently unsafe and leaves insurmountable problems for future generations. In the end effect, I suspect that the answer to accumulated problems will be, We're so sorry but we erred.

When Galileo claimed that the world was a sphere and a satellite of the sun and not the center of the universe, the whole world - especially the Vatican held him to be insane

The Church of Rome wasn't the world, and Galileo was accused of heresy, not madness.  (At least he got off better than Tycho Brahe.)

This was despite evidence that even the ancient Greeks would probably have accepted as conclusive.  Earth casts circular shadows on the Moon during lunar eclipses, for example.  The observation of satellites orbiting both Mars and Jupiter clinched it.

We have conclusive evidence from multiple examples that nuclear and hydro can decarbonize electric grids down to less than 20 gCO2/kWh.  We have NO examples of wind and solar doing this, despite 40 years of subsidies.  The renewablistas are today's Vatican, accusing nuclear Galileo of heresy.


and threatened him with death unless he revoked his insane theories.

The renewablistas have been accusing pro-nukes of heresy for nigh unto 60 years now.  They are analogous to the 17th century Vatican.

At the moment we have no nuclear fusion technology available for power production. I could make the quip that it has always been 20 years in the future and always will be but I think that there has been some progress. MIT has a more compact plasma containment device under design and you posted something on HB11 which is certainly interesting but a long ways from being a practical power technology.

Meanwhile TerraPower/GE Hitachi Nuclear Energy are planning on having an operating 345 MW Gen 4 Fast Sodium cooled running in 2028 in Wyoming. The facility will also have hot salt energy storage that will allow load following. This facility will be about 4 times more fuel efficient than a light water reactor and can run on mixed fuels so it will produce considerably less waste. It is also "walk-away" safe. See: https://natriumpower.com/

If you throw out Chernobyl, which was some Soviet era idiocy, there have been no deaths with commercial nuclear power although I have seen that there might be 2 "excess deaths" linked to Fukushima. It might be noted that the earth quake itself did not damage the Fukushima reactors but the lack of power to keep the cooling pumps running caused the problems and the new plants being proposed and built do not have this problem. The worst power production in terms or safety is coal and probably then natural gas. I was surprised to see that wind power was considered safer than solar in terms of deaths caused with deaths apparently being caused by installation accidents and high voltage flashovers. One of the potential worst problems with wind power is causing fires as there is no way to control fires that occur in the nacelles. The nacelle fires have already caused several ground fires in the US and have caused at least 2 deaths.

@ sd:
The world's largest Stellerator pilot fusion reactor is located in Greifswald, Germany. It has been ramped up and prepared last year for a final test. This test is intended to run permanently for a duration of 30 minutes. I'm confident that this test will be completed successfully. This final test will be the basis for designing future Stellerator reactors that produce at least 10x as much power as was necessary for initiating the fusion process itself.
IMHO the ITER in France has produced some interesting and usable data which can also be implemented in the Stellerator design. Apart from that, The ITER is a "dead end street" and a billion dollar grave with absolutely no future. A Tokamak is capable only for pulsed operation and totally incapable for continuous / permanent fusion.
Stellerators are no longer 20 years around the corner.
The HB11, which you also mentioned in your post, is the most interesting type of all three designs. The lab results have been very promising (approx. 9x better than what can be expected of the Stellerator). As such, I would consider the Stellerator as a bridging technology until the stretch from "Lab to Fab" has been successfully completed. Especially intriguing of the HB11 design is its size, weight, and cost in relation to its expected power output; the safety factor enables it to be located almost anywhere that can be imagined.