Meanwhile, wet waste feedstocks, such as animal manure and fats, oils, and greases (FOG), represent another important category of resources that could be utilized to produce MCCI bioblendstocks due to its abundant availability. Skaggs et al. estimated that with conversion by hydrothermal liquefaction (HTL) and upgrading, the wet waste resource availability in the United States could be converted to jet fuel that is equivalent to about 24% of the U.S. demand in 2016.

Given the nature of wet waste resources that requires dedicated waste management practices to collect, store, treat, and dispose of the waste, shifting the waste resources from going through conventional waste management practices to utilization as feedstocks for energy production may represent an avoided cost of waste management and disposal. About 61% of the total sewage sludge, 27% of the total manure, and 7% of the total food waste may be available at negative prices, while FOG is more commoditized with its price determined by market demand. Thus, the use of wet waste resources as feedstocks in advanced bioenergy processes represents an opportunity to recycle organic waste material into renewable energy and at the same time offset the cost and environmental impact of their disposal via more conventional practices, such as landfilling, anaerobic digestion (AD), or incineration. 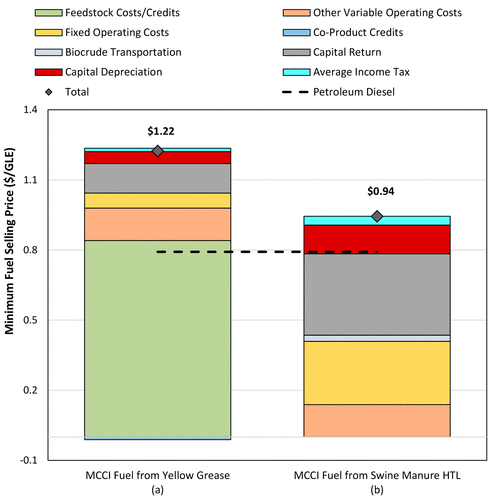 Cost breakdown of the minimum fuel selling price for MCCI fuel produced from (a) yellow grease and (b) swine manure HTL, in comparison to the diesel price of $0.79/GLE. OU et al. 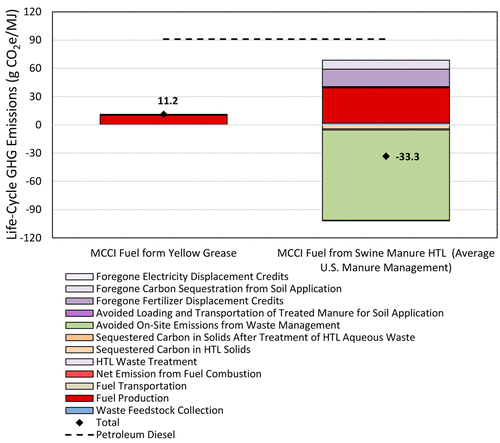 TEA/LCA results of the two waste feedstock pathways highlight their economic and environmental performances and opportunities for improvement. From an economic perspective, the price of waste feedstocks is low and even negative when the cost impact of fuel carbon regulation is considered. Meanwhile, the plant size has a great impact on the MFSP. It is thus critical to develop a robust supply chain for a large-scale waste-to-fuel facility so that production costs could be reduced with economies of scale.

On the environmental side, using waste feedstocks for energy production could offer great GHG emission reduction potentials relative to petroleum diesel fuels. Avoided manure management emissions due to shifting the waste feedstocks to MCCI bioblendstock production could generate great GHG credits for a waste-to-fuel pathway like in the case of the swine manure HTL pathway. No BAU scenario was considered for the yellow grease to HEFA diesel pathway because yellow grease has been utilized for fuel production in an established market. Should the market dynamics of yellow grease as a feedstock for biofuel production change, the cost and environmental impacts of treating yellow grease at wastewater treatment plants should be considered in future analysis.