EIA: Energy prices rose more than other commodities in 2021; up 59% over the year

Energy prices used in the S&P Goldman Sachs Commodity Index (GSCI) ended 2021 59% higher than the first trading day of the year, according to the US Energy Information Administration (EIA). Price increases were largely driven by increased demand from the initial phase of global economic recovery from the COVID-19 pandemic. 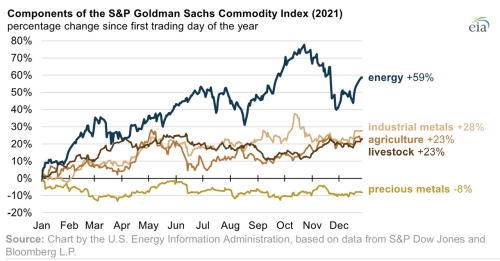 The GSCI is a commodity index that tracks the performance of global commodities markets. The index is a weighted average of commodity prices, and the index updates the weight it allocates to each commodity every year. In 2021, the energy index group made up 54% of the GSCI, and two crude oil benchmarks, West Texas Intermediate (WTI) and Brent crude oil, accounted for approximately 70% of the weighting in the energy sector index. WTI crude oil makes up the largest share of the overall GSCI at more than 21%. Among energy commodities, prices for petroleum products such as RBOB and ULSD (ultra-low sulfur diesel, which is used as a benchmark for heating oil trading) increased the most during 2021, at 67% and 64%, respectively. Prices for crude oils such as WTI (62%) and Brent (55%) increased by slightly less.

Futures prices for gasoil (the name for ULSD in Europe) increased by 54% during 2021. Natural gas prices increased the least among energy commodities, although 38% is still a relatively large increase.

Several factors contributed to the higher energy commodity prices throughout 2021, including weather disruptions, such as the February winter freeze and Hurricane Ida; increased demand for gasoline and diesel; and increasing demand for crude oil and natural gas at a rate faster than increased production, the EIA said.