A new modeling study led by researchers from George Washington Universit (GWU) finds that 86% of people living in cities worldwide (~2.5 billion people) are exposed to annual average levels of fine particulate matter exceeding the World Health Organization (WHO) guideline from 2005, leading to 1.8 million excess deaths in cities globally in 2019.

A second study, also led by the GWU researchers, finds that nearly 2 million cases of asthma in children are linked to traffic-related nitrogen dioxide air pollution, with two in three occurring in cities.

Both open-access studies are published in The Lancet Planetary Health journal and highlight the ongoing need for strategies to improve air pollution and reduce exposure to harmful emissions, particularly among children and the elderly.

1.8 million excess deaths attributable to PM2.5 in 2019. In the first study, researchers looked at PM2.5. Inhalation is known to increase the risk of premature death from conditions such as cardiovascular disease, respiratory disease, lung cancer, and lower respiratory infection.

Despite more than half (55%) of the world’s population now living in cities, to date there has been little research into how PM2.5 disease burdens compare across urban areas globally, with most assessments analyzing PM2.5 in megacities only. This new study examines PM2.5 concentrations and associated mortality trends in more than 13,000 cities globally between 2000-2019. 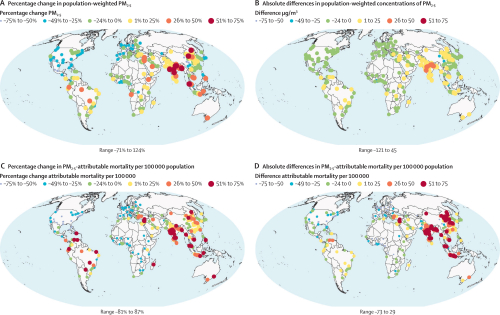 Average population-weighted PM2.5 concentration across all urban areas globally was 35 micrograms per cubic meter in 2019, with no change from 2000. This is equivalent to seven times the 2021 WHO guideline for annual average PM2.5 (five micrograms per cubic meter) [2]. The authors estimate that 61 in every 100,000 deaths in urban areas was attributable to PM2.5 in 2019.

Although global urban average PM2.5 concentrations were consistent over this period, there were large variations by region. Urban areas in South-East Asia (including India) saw the largest regional increases, with a 27% increase in average population-weighted PM2.5 concentration between 2000-2019. South-East Asian cities also saw the largest increase in PM2.5-attributable mortality rates over this period, increasing by 33% from 63 to 84 in 100,000 people.

The research found that decreasing PM2.5 concentrations in urban areas over the two decades (for example, African, European, and North and South American cities experienced 18%, 21%, and 29% decreases in PM2.5 concentrations) did not correspond to the same level of decreases in PM2.5-attributable mortality rates on their own, demonstrating that other demographic factors, for example, an ageing population and poor general health, are influential drivers of pollution-related mortality burdens.

The majority of the world’s urban population still live in areas with unhealthy levels of PM2.5. Avoiding the large public health burden caused by air pollution will require strategies that not only reduce emissions but also improve overall public health to reduce vulnerability.

The authors acknowledge several limitations with the study. Some uncertainties in the values were unable to be fully accounted for, such as the use of country-wide baseline disease rates in calculations of mortality, which may differ to those specifically in urban areas. This study also only assessed impact of PM2.5 on mortality, without accounting for other health burdens caused by PM2.5 such as low birth weight, premature birth, and cognitive impairment.

Two-thirds of pediatric asthma cases linked to air pollution in cities. In the second study, researchers looked at NO2 (nitrogen dioxide gas), an air pollutant mainly emitted by vehicles, powerplants, industrial manufacturing, and agriculture. Previous research has shown transport-related air pollution, for which NO2 serves as a marker, to be associated with both asthma exacerbation and new onset asthma in children. However, to date there have been no studies specifically looking at trends in the burden of transport-related NO2 pollution on pediatric asthma incidence in urban areas.

In this research, global NO2 concentrations were calculated with a 1 km resolution by combining satellite data with datasets on different types of land use, like roads and green space. The NO2 concentrations were applied to population and baseline asthma rates to estimate pediatric asthma incidence attributable to NO2 between 2000-2019 in 13,189 urban areas worldwide.

Our results demonstrate the important influence of combustion-related air pollution on children’s health in cities globally. In places that have effective air quality management programs, NO2 concentrations have been trending downward for decades, with benefits for children’s respiratory health. Even with these improvements, current NO2 levels contribute substantially to pediatric asthma incidence, highlighting that mitigating air pollution should be a critical element of children’s public health strategies.

—Dr Susan Anenberg, George Washington University, co-first author on the NO2 study and corresponding author of both studies

The authors acknowledge some limitations with this study. Baseline pediatric asthma rates may have been underestimated in low- to middle-income countries, leading to an underestimation in NO2 attributable asthma impacts. Similarly, national pediatric asthma rates were used due to a lack of data on urban rates, and asthma prevalence varies within countries. Finally, it is currently unknown whether pediatric asthma incidence is associated with NO2, the traffic-related air pollution mixture, or the broader combustion-related air pollution mixture. The results could be affected by exposure misclassification, which would lead to asthma impacts being underestimated.

One additional perverse consequence of soaring electricity prices here in Spain(300% in 5 years) and elsewhere - apart from greatly reducing the appeal of EVs - is that many people are now burning wood and coal in fireplaces to heat their homes. The particulate-filled stench in the streets at night is often inescapable. The ostensible deep, universal "Covidian" concern for human (pulmonary etc) health, well-being and welfare seems to evaporate in other (non-Covid) clean air and respiratory/cardiovascular health contexts. For example, smoking outside bars, pubs, restaurants etc is just as rife now here in oh-so "Covid-concerned" Spain as it was pre-Covid so that drinking or eating al fresco - ie. minus the stench of tobacco fumes - is rarely possible.
Paul G