Moscow has deployed its 1000th electric bus. This electric bus has become the 400th vehicle purchased with the funds from the green bonds. The goal of the project is to show how such collaborations can help to make the city eco-friendlier as well as to draw attention to the environmental protection. 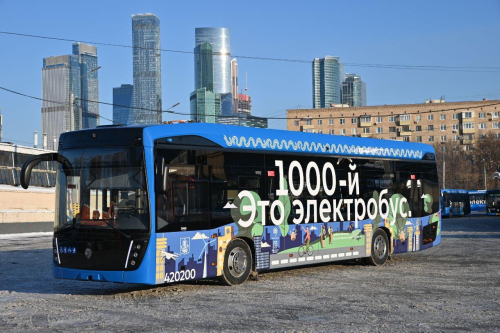 Electric buses were launched in Moscow in 2018. In the meantime, this innovative surface transport has proved its efficiency. The transport has been launched on 66 bus routes, run 60 million kilometers, and carried more than 150 million passengers.

Moscow is now actively developing charging infrastructure. There are more than 168 charging structures in the city. By the end of 2023 this number will increase to up to 500 stations.

Each electric bus carries about 85 people. This transport is also convenient for passengers with disabilities: electric buses are provided with a low-floor, ramps, and accumulation areas. The electric buses are equipped with gadget chargers on the handrails, climate control systems and media screens.

The buses also deal with Moscow temperature extremes. For the fourth consecutive winter season, the transport has been operating without any interruptions. The temperature range of its work is from -40 to +40 degrees Celsius. Batteries are equipped with a temperature control system to prevent vehicles from overheating in summer and freezing in winter.

In 2021, Moscow stopped buying diesel buses for the major surface public transport operator. Next year, Moscow plans to buy 600 more electric vehicles. By the end of 2023, the city will have received more than 2,200 electric buses. Nearly 40% of all surface transport fleet will be electric.

The Government of Moscow is also developing an innovative hydrogen bus model together with KAMAZ and RUSNANO.