Home About Contact RSS GCC Twitter Newsletter
bp and EnBW successful in ScotWind offshore wind bid; potential generating capacity of 2.9GW, up to £10B of investment
DOE: MY 2021 all-electric vehicles had a median driving range about 60% that of gasoline-powered vehicles

The strategic initiative will be implemented by Australian Lithium Alliance Pty Limited (ALA), a wholly owned subsidiary of EVM, through joint ventures and off-take agreements as an alternative to Chinese companies that currently dominate the purchase of spodumene concentrate from Australia to supply chemicals processing companies in China.

EVM launched the formation of the Australian Lithium Alliance with the release of details of an agreement in the form of an Earn-in Joint Venture and Lithium Rights Deed (Agreement) between EVM, ALA, Zenith Minerals Ltd (ZNC) and Black Dragon Energy (Aus) Pty Limited (BDE), a wholly subsidiary of ZNC.

The agreement will accelerate the exploration for and, if successful, the development, mining, processing and production of lithium minerals from the strategically located Split Rocks and Waratah Well Tenements under the Zenith Lithium Joint Venture. EVM will also enter into a life-of-mine offtake agreement for all production of SC6 from all lithium minerals projects developed by the Zenith Lithium Joint Venture. 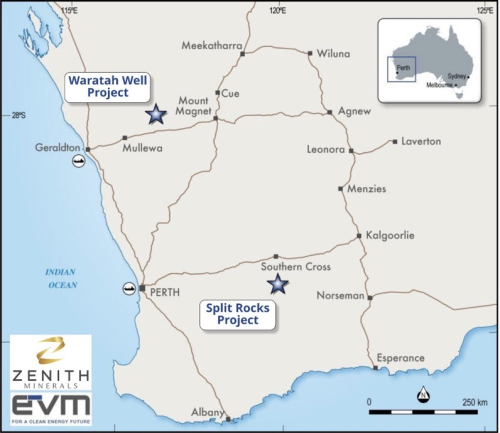 Under the agreement, lithium minerals include “lithium (in any and all forms) and all other metals including tantalum, caesium, all rare earth elements, nickel, cobalt, copper and scandium in the Tenements but specifically excludes gold, silver and other precious minerals however they may occur”.