Toyota has built, tested and delivered 6 fuel cell modules for the next phase in the project. These modules include the latest Gen2 technology offering more power and higher density in a more compact package. It was decided to use the flat module configuration, allowing the most efficient integration in the demonstration train’s roof. Three of the modules have already been delivered to consortium partner the Spanish hydrogen research center Centro National de Hidrógeno (CNH2). These fuel cell modules will first be tested together with the batteries in the full system on a test bench, before moving to Spanish manufacturer CAF. The remaining 3 modules will go directly to CAF by mid-February, where all 6 modules will be installed in the demo train.

With the delivery of Toyota’s fuel cell modules, the teams can now develop the Fuel Cell Hybrid Power Pack for the hybrid, bi-modal drive system powering of the train. This system combines the electrical power supplied from the overhead line with the fuel cell hybrid power pack that works independently, powering the train. 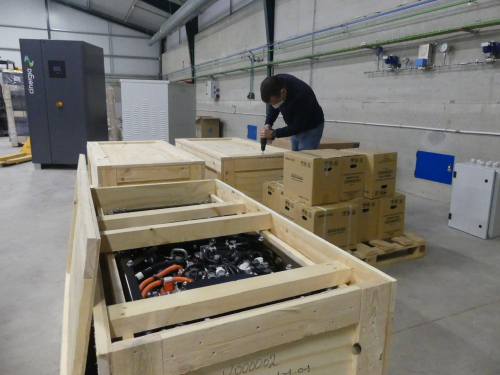 This demonstrator train is a CIVIA electric commuter train manufactured by CAF, and provided by Renfe.

Once the integration is complete the consortium will begin the initial functional tests and trial runs for the approval process within the Spanish and Portuguese tracks. The project aims at testing the energy management and validating whether it can be a reliable and viable solution for hydrogen zero-emission trains. The FCH2Rail project is funded by the Fuel Cells and Hydrogen Joint Undertaking (FCHJU).