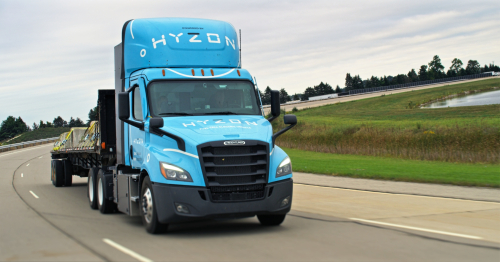 Through Transform Material’s proprietary technology, the envisioned facilities (acting as hubs) can be built to produce hydrogen efficiently even at small scales of 1-5 tons/day, offering modular construction that allows capacity to grow as customer demand increases. The production of hydrogen as a co-product with acetylene provides significantly advantaged hydrogen cost structures.

Hyzon believes the key to decarbonizing transport in the near-term requires overcoming the hydrogen infrastructure challenges. Our solution is to co-invest in facilities that produce low-cost hydrogen at small volumes, and which can be built in a matter of months. By coordinating these facilities with existing and developing customer interest, we can accelerate the deployment of our zero-emissions, hydrogen-powered vehicles.

Pursuant to the MoU, Hyzon and Transform will seek to align hydrogen production with the accelerating demand created by Hyzon’s heavy-duty vehicles. Hubs would be located and sized to fulfill existing and potential customer needs, leading to high utilization by Hyzon’s back-to-base vehicle deployments. Transform Materials’ clean plasma technology can convert methane into hydrogen and acetylene without the CO2 emissions that result from traditional processes for generating hydrogen and acetylene. Utilizing this flexible, readily available feedstock without emitting CO2 results in low-to-negative carbon intensity hydrogen for powering Hyzon’s zero-emissions vehicles.

Transform Materials offers a sustainable alternative for utilizing traditional hydrocarbon feedstocks such as natural gas and biogas. Transform’s innovative technology avoids combustion entirely by turning these abundant resources into hydrogen, a carbon-free fuel, and into useful building-blocks for important industrial chemicals. Working with Hyzon, we can de-carbonize two major industries at once: the transportation industry with our clean hydrogen, and the chemical manufacturing industry with our clean acetylene.

Under the MoU, the companies plan to explore sites in the US, Canada, Europe and potentially China for facilities that would incorporate the Transform technology, with initial evaluations expected to begin early this year. Transform Materials will build, own, and operate the hubs, with Hyzon having the right to invest equity in the facilities. Feedstock and dispensing will be provided through third parties.