Researchers at Japan’s National Institute for Materials Science (NIMS) and the NIMS-SoftBank Advanced Technologies Development Center have developed a lithium-air battery with an energy density of more than 500 Wh/kg—significantly higher than currently lithium ion batteries. The research team then confirmed that this battery can be charged and discharged at room temperature.

The team found that the battery developed by the team shows the highest energy densities and best cycle life performances yet achieved and said that these results signify a major step toward the practical use of lithium-air batteries. An open-access paper on their work appears in the RSC journal Materials Horizons.

Lithium-air batteries have the potential to be lightweight and high capacity, with theoretical energy densities several times that of currently available lithium ion batteries. Because of these potential advantages, they may find use in a wide range of technologies, such as drones, electric vehicles and household electricity storage systems.

NIMS has been carrying out basic research on lithium-air batteries with support from the ALCA-SPRING program (ALCA: Advanced Low Carbon Technology Research and Development Program, SPRING: Specially Promoted Research for Innovative Next Generation Batteries). This program has been funded by the Japan Science and Technology Agency (JST) with the goal of accelerating large-capacity rechargeable battery R&D.

In 2018, NIMS and SoftBank co-founded the Advanced Technologies Development Center to conduct research with the goal of putting lithium-air batteries into practical use in mobile phone base stations, the Internet of Things (IoT), HAPS (high altitude platform stations) and other technologies.

Despite their very high theoretical energy densities, only a small number of lithium-air batteries with high energy densities have actually been fabricated and evaluated. This limited success is attributed to the fact that a large proportion by weight of lithium-air battery contains heavy inactive components (e.g., separators and electrolytes) that do not directly participate in actual battery reactions.

This research team had previously developed original battery materials that significantly increase the performance of lithium-air batteries in ALCA-SPRING-supported research. The team then developed a technique to fabricate high-energy-density lithium-air cells at the NIMS-SoftBank Advanced Technologies Development Center.

Finally, the team created a new lithium-air battery by combining these new materials and the fabrication techniques. 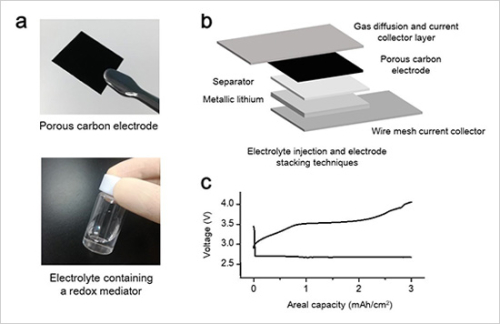 The team is currently developing higher-performance battery materials and plans to integrate them into the newly developed lithium-air battery with the aim of greatly increasing the battery’s cycle life. The team then plans to expedite efforts to put the battery into practical use at the NIMS-SoftBank Advanced Technologies Development Center.

This work was mainly supported by the JST ALCA-SPRING program and the NIMS-SoftBank Advanced Technologies Development Center.

I am not sure whether these devices should be considered batteries or fuel cells but anyway, another problem that they have for aircraft use is that unlike a conventional IC engine that burns fuel or even a hydrogen fuel cell is that they gain mass as they operate so the landing weight is more than the takeoff weight. A hydrogen fuel cell would have this problem but the resulting water is normally exhausted.

Whether or not this battery makes it into mass production at competitive cost, it’s an R&D achievement to be lauded.

It’s also a milestone that reinforces the certainty that we’ve only realized a fraction of the obtainable energy density of battery chemistries. When we eventually achieve 500wh/kg in commercial batteries, it will completely change the landscape of commercial and passenger transport on land, air and water.

I would gladly fly an aircraft whose landing weight is more than the takeoff weight.

An aircraft which is lighter on ground roll, rotation and climb out has a huge performance and safety advantage vs one that is heavier.

Weight and balance calculations and considerations will change of course, but operating procedure changes to accommodate any new technology.

Some have said they may need a closed oxygen system

@SJC
A closed oxygen system could also be used on combustion engines. CO2 and water will be removed from the exhaust, which is then recirculated, and oxygen is added to the mixture. Instead of nitrogen as the “bulk” gas, argon could be used. This gas mixture has much higher polytropic index (Cp/Cv) than air, which improves efficiency. The added benefit is a zero emission (!) engine. Needless to say, this system would be impractical on road vehicles, but it has some specific niches, e.g. in submarine applications.