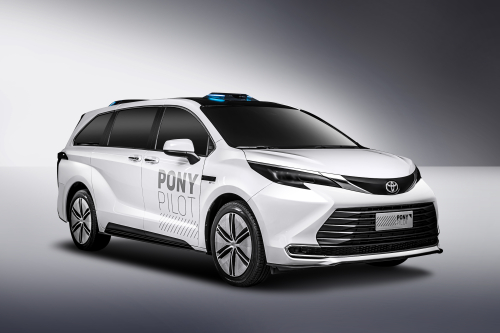 Pony.ai started to develop the self-driving capabilities for the S-AM China model together with Toyota as early as 2019. Pony.ai believes this highly customized S-AM—with its dual redundancy system—will provide better functionality and control performance for Level 4 AD development. In addition, as an MPV model, the S-AM has a flexible riding configuration to meet numerous family and professional usage scenarios.

The sensor solution, comprising 23 sensors, includes four solid-state LiDARs on the roof, covering a 360° field of view; three near-range LiDARs on the body of the vehicle, covering the blind spots of the roof LiDARs; four millimeter-wave radars located at the corners of the roof; one long-range forward-facing millimeter-wave radar, and 11 cameras deployed around the roof and body of the vehicle (in a combination of wide angle, super wide angle, middle and long-range, and traffic light detection cameras).

The central mechanical LiDAR has been replaced with solid-state LiDARs. The self-developed traffic light camera has a resolution rate 1.5 times that of the previous generation. Coupled with its in-house Sensor Fusion technology, Pony.ai will significantly reduce the cost associated with the solution by utilizing mass-produced, automotive-grade sensors.

Pony.ai is also introducing its next-generation mass-production autonomous computing unit, using the NVIDIA DRIVE Orin. This builds on Pony.ai and NVIDIA’s relationship, which dates back to 2017 when the company first adopted the NVIDIA DRIVE platform. 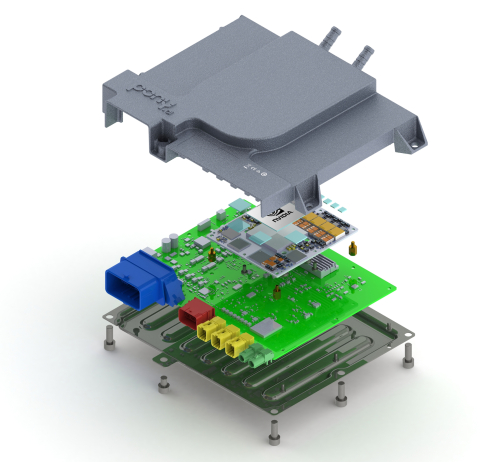 Pony.ai’s autonomous computing unit features low latency, high performance, and high reliability. The company is one of the first in the autonomous vehicle industry to create a product portfolio featuring multiple configurations with one or more DRIVE Orin processors and automotive-grade NVIDIA Ampere architecture GPUs. This enables scalable deployment across self-driving trucks and robotaxis, and accelerates Pony.ai’s future of a robust, mass-production platform for autonomous vehicles.

Compared with the previous generation computing platform, the new generation is expected to have greater than a 30% increase in computing power, at least 30% less weight, and more than a 30% reduction in cost.

The new generation system has complete redundancy in place, which maximizes safety and enables the vehicle to pull over or stop safely in case of an emergency.

In the S-AM model, Pony.ai is also unveiling a concept design for the new AD system, making the sensor suite more integrated and aesthetically pleasing while also more effective for mass production. 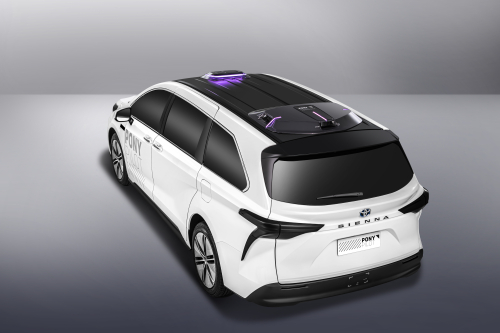 Among other design features, this concept design includes rooftop signaling units which have a horizontal lighting unit on the front and three vertically placed lighting stripes on the rear, to give the vehicle an elegant futuristic touch. By using different colors and lighting combinations, the rooftop signaling units can provide external communication and interaction, demonstrating the robotaxi’s status and intentions.