Researchers from Lehigh University, in collaboration with colleagues from the East China University of Science and Technology (ECUST), have developed an induced activation strategy to enhance the performance of the ternary Cu/Zu/AL2O3 catalyst towards the methanol steam reforming (MSR) reaction (used as a model reaction). Cu/Zu/AL2O3 is an important industrial catalyst, capable of catalyzing the low-temperature water–gas shift reaction (hydrogen production), methanol synthesis and MSR (hydrogen production).

Their treatment of the catalyst improved the long-term stability by threefold and resulted in more abundant Cu–ZnOx interfacial sites with catalytic activity enhanced by twofold towards the methanol steam reforming reaction. An open-access paper on their work is published in the journal Nature Catalysis.

The surface structure of heterogeneous catalysts is closely associated with their catalytic performance. Current efforts for structural modification mainly focus on improving catalyst synthesis. Induced activation, on the other hand, takes a different approach—manipulating the catalyst surface by controlling the composition of reducing agents at the catalyst activation stage where the catalyst is transformed to its optimum state.

A major disadvantage of the copper/zinc oxide/aluminum oxide catalyst is that the active metallic copper nanoparticles are prone to sintering.

Previous studies have revealed that zinc oxides can interact with metallic copper nanoparticles by migrating onto their surfaces. Such a phenomenon, known as the strong metal–support interaction (SMSI), results in surface modification of the metal sites and retards the sintering of copper nanoparticles as well. Studies have claimed that the kinetics of the SMSI phenomena are particle-size dependent and become sluggish for large nanoparticles in most cases. Therefore, the relative kinetics of copper sintering and zinc oxide migration play an essential role in determining the catalyst structural evolution.

Herein, we reveal that the SMSI kinetics of the commercial Cu/ZnO/Al2O3 catalyst can be accelerated in a H2/H2O/CH3OH/N2 mixture at elevated temperatures. This finding intrigued us and led us to develop a method to optimize the catalyst structure via controlling the composition of the reducing agents at the catalyst activation stage.

Migration of ZnOx onto the surface of Cu nanoparticles can be precisely manipulated and optimized, leading to improved activity and stability towards the MSR as the model reaction. Moreover, the formation mechanism and essential role of Cu–ZnOx interfacial sites for enhanced catalytic performance are elucidated with a series of in situ characterization studies and density functional theory (DFT) calculations. This work provides a facile approach to improve the catalytic performance of the commercial Cu/ZnO/Al2O3 catalyst by changing the activation conditions. 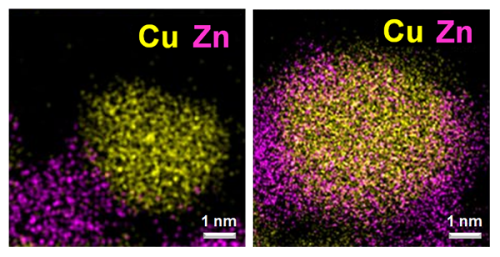 This development effectively doubles the catalytic efficiency of these materials, enhancing their productivity and extending the life of the catalyst. And importantly, induced activation can provide significant benefit to industry without shutting down a chemical plant—or the building of a new and costly one.