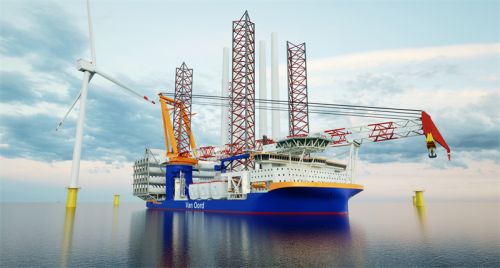 A vessel being built for Van Oord at Yantai CIMC Raffles shipyard will be powered by five Wärtsilä 32 engines. @ Van Oord

The order, which includes the methanol fuel supply system, was placed in December 2021, and it will be booked in the order book in Q1 2022. The delivery of the equipment is scheduled for early 2023.

The methanol engine order extends Wärtsilä’s leading position in support of the maritime industry’s decarbonization ambitions, and in the use of the fuel. Wärtsilä has more than half a decade’s experience with methanol, having converted the first of four engines on Stena Germanica to use the fuel in 2015.

The Wärtsilä 32 engine has been a workhorse since the 1980s, with more than 5,300 engines delivered to the marine market and more installations on land. With proven reliability and low fuel consumption, the Wärtsilä 32 represents an efficient solution throughout the entire lifecycle of the vessel.

Given the history, Wärtsilä decided that the 32 engine was the natural choice for bringing the advantages of methanol fuel to these applications. 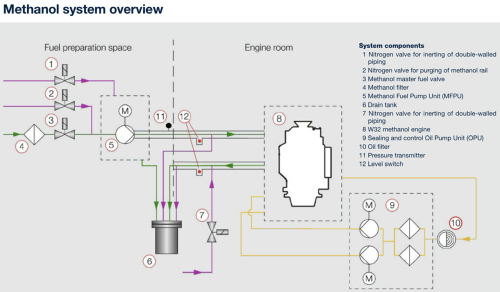 Green methanol is among the potential and most promising future fuel candidates. It is made using hydrogen from renewable-sourced electricity and recaptured carbon. The benefits of methanol are that it is relatively inexpensive to produce, is widely available, and easy to store. Furthermore, the global supply infrastructure is already established.

In line with its strategy to meet future development needs through collaboration with key stakeholders, Wärtsilä recently signed a long-term strategic cooperation agreement with Chinese shipyard Yantai CIMC Raffles. The cooperation is aimed at the design and development of future-proof solutions for newbuild vessels. This will include the use of future carbon-free fuels and other integrated technology solutions.

During the coming few years, Wärtsilä will commercialize engine technologies that allow the use of all alternative fuels currently under discussion. Given the modularity of modern engines, this means that owners can already today future-proof their existing assets and plan for the use of new fuels as and when they become available.

Wärtsilä will also supply a package of leading-edge thrusters to the Van Oord vessel for efficient station keeping. This marks the seventh order for Wärtsilä thrusters for WTIVs in 2021 and highlights the company’s position in the offshore wind segment.