Wisk, a leading Advanced Air Mobility (AAM) company and developer of the first all-electric, self-flying air taxi in the US, has secured $450 million in funding from The Boeing Company, making it one of the most well-funded AAM companies in the world. Combined with previous funding, this investment reinforces Wisk’s strong position as a privately-backed AAM leader and highlights the strength of Wisk’s strategic partnership with Boeing and their collaboration on critical technology development.

Wisk’s vertical lift system features 12 independent rotors with only one moving part: the fan. An issue with one rotor is automatically handled so the flight can continue.

This investment will further advance the development of Wisk’s 6th generation eVTOL aircraft, a first candidate for certification of an autonomous, all-electric, passenger-carrying aircraft in the US. The funding will also support the company as it enters an intensive growth phase over the next year, its preparations for the launch of scale manufacturing, and the company’s go-to-market efforts. 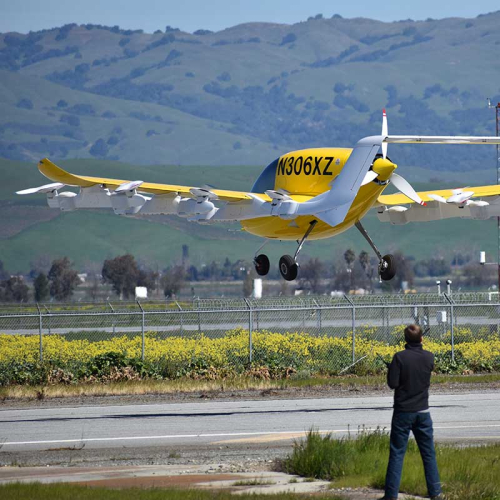 Within five years following the certification of its 6th generation aircraft, Wisk intends to operate one of the industry’s largest fleets of AAM eVTOL aircraft. The scale of this fleet is enabled by the company’s autonomous technology, a competitive differentiator and industry-recognized key to scaling services and maximizing safety. In this timeframe, Wisk anticipates close to 14 million annual flights bringing time savings to over 40 million people across 20 cities.

With this investment, we are reconfirming our belief in Wisk’s business and the importance of their work in pioneering all-electric, AI-driven, autonomous capability for the aerospace industry. Autonomy is the key to unlocking scale across all AAM applications, from passenger to cargo and beyond. That’s why straight-to-autonomy is a core first principle. Boeing and Wisk have been at the forefront of AAM innovation for more than a decade, and will continue to lead in the years ahead.

Wisk began in 2010 as Zee Aero and later merged with Kitty Hawk Corporation. Upon recognizing the commercial potential of Wisk’s 5th generation aircraft, the aircraft and team were spun out to form Wisk, with an investment from The Boeing Company. Over the past decade, Wisk has achieved a number of aviation and industry firsts, most notably, the first flight of an all-electric, autonomous, eVTOL aircraft designed for passenger use, in the US.

Previous undisclosed funding rounds were led by The Boeing Company and Kitty Hawk Corporation, through a joint venture, making Wisk one of the only AAM companies to be backed by two aviation leaders. Kitty Hawk remains an investor and has supported the development of Wisk’s previous generations of aircraft.

There seems to be a lot of money floating around looking for ideas. I just wonder how many of the machines will need to be made to pay off a $450 million investment. I basically believe in electric aircraft and might even accept the concept of autonomous flight but I am less sure about the value of autonomous air taxis. I guess time will tell and it is not my money.