Yara signed a contract with Linde Engineering for the construction and delivery of a green hydrogen demonstration plant at Yara’s ammonia production facility at Herøya Industripark in Porsgrunn, Norway. The project, which is supported by a NOK 283 million (US$31.5 million) grant from Enova (announced in December 2021), will demonstrate that ammonia produced using renewable energy can reduce the impact of carbon dioxide in fertilizer production. 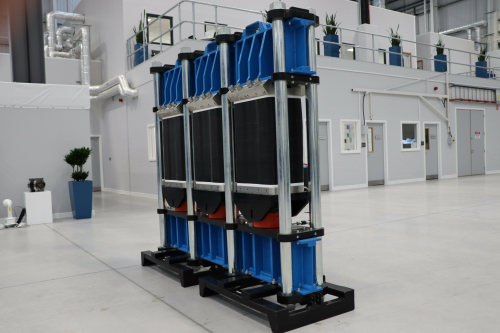 The project will be realized by water electrolysis which will produce green hydrogen to partially replace the hydrocarbon-based hydrogen production in Yara’s plant, using proton exchange membrane (PEM) technology. The 24MW system from ITM Power supplying 10,368 kg/day of hydrogen will account for approximately 5% of the plant’s consumption and serve as a feasibility study for future upscaling.

This will be the second 24 MW PEM electrolysis plant designed and constructed by Linde Engineering; the first is now being built at the Leuna Chemical Complex in Germany.

The project aims to supply the first green ammonia products to the market as early as mid-2023, both as fossil-free fertilizers, as well as emissions-free shipping fuel. Green ammonia is the key to reducing emissions from world food production and long-distance shipping. With this project, we move from intention to actions together with Linde Engineering and local contractors.

The plant will have an annual capacity of around 10,000 kg/day of hydrogen. It will replace ethane as raw material in production, thereby reducing 41,000 tons of carbon dioxide emissions annually, the same amount as emitted by roughly 16,000 passenger vehicles.

The electricity will be delivered from renewable energy sources and will provide enough hydrogen to produce 20,500 tonnes of ammonia per year which can be converted to between 60,000 and 80,000 tonnes of green fertilizer, roughly five times the annual production of food grade wheat in Norway.The project will be Yara’s first step towards decarbonization of the ammonia industry.

Yara will in addition to Linde work with a significant number of local suppliers in the Grenland region on this project.

Yara is the world's leading supplier of mineral fertilizer and has a market share of approximately 8%. Together with Yara Sluiskil in the Netherlands, Yara Porsgrunn is the biggest of Yara International’s production units. The production of fertilizer at the Porsgrunn works helps satisfy the nutritional needs of more than 35 million people. The company’s products are delivered all over the world, the biggest market being Asia, which buys more than 25% of NPK (complex fertilizer) capacity each year.