Solid-state Li-metal battery company QuantumScape released data showing its battery cells have completed 400 consecutive 15-minute fast-charging (4C) cycles from 10% to 80% of the cell’s capacity while retaining well above 80% of the initial energy—a first for this type of battery technology. 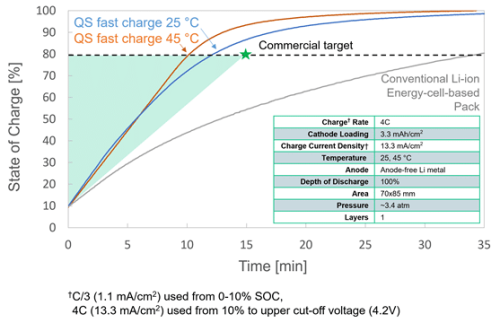 Internal combustion engine vehicles can be refueled in about 5 minutes, whereas today’s leading lithium-ion electric vehicle (EV) batteries typically need around 30 minutes to fast charge from 10% to 80% capacity at a rate that doesn’t reduce the battery’s lifetime. This longer charge time prevents EVs from providing the same user experience as internal combustion engine vehicles. If QuantumScape can successfully deliver today’s demonstrated capability into the marketplace, the time difference between recharging EVs and refueling their combustion-engine counterparts will be only several minutes, which could help enable broader EV adoption.

The materials used in today’s EV batteries, such as the graphite in the anode, have physics-based rate limitations that can cause permanent damage when charged repeatedly at fast rates, reducing the range the vehicle can travel.

As QuantumScape explains in a white paper discussing its fast-charging results:

When charging speeds exceed the diffusion rate of lithium into graphite, lithium begins plating on top of the graphite particle, rather than diffusing into the atomic lattice of the graphite. This plating process reduces the available lithium and lowers the battery’s capacity. Because the lithium metal reacts with the liquid electrolyte to form chemical reaction side products on the surface of the graphite, it forms a barrier that makes it increasingly difficult for lithium ions to diffuse into the graphite. This increases cell resistance and accelerates cell degradation. In the worst case, lithium plating on graphite can lead to the formation of dendrites, root-like structures of lithium that can grow from the anode to the cathode and cause a short-circuit, killing the battery and potentially causing a fire or explosion. These fundamental safety risks are why charging speeds are limited in today’s EVs.

This can put EV drivers in the position to choose between the convenience of fast charging and preserving their battery range. QuantumScape tested battery cells from a commercially available third-party EV with the same protocol and found that those third-party cells rapidly degrade after only a few dozen charge cycles.

QuantumScape’s lithium-metal battery cells retained more than 80% of their initial energy after 400 cycles of 15-minute (4C) fast charge between a 10% and 80% state of charge. For a vehicle with 400 miles of range, 400 cycles represent approximately 160,000 total driving miles. 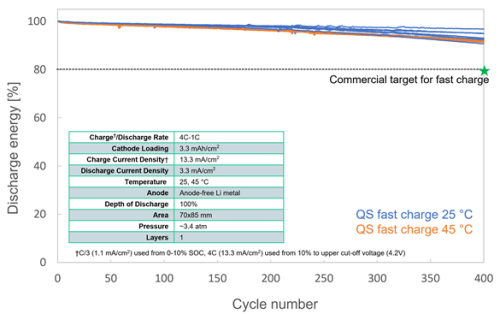 QuantumScape says that the core innovation that enables its cells to achieve such an increase in fast-charging capability is its ceramic solid-electrolyte separator. This component resolves several of the limitations of legacy lithium-ion batteries.

This is an exciting development, and may eventually help alleviate congestion along public charge corridors.

But consider that today, with a 400 mile Tesla Model S, you can drive from Los Angeles to San Francisco without recharging.

With a Lucid Air, you can drive from SF to the Mexican border without charging.

A single charge in that Lucid will get you from Los Angeles to Portland Oregon. Presumably, you’d charge overnight after 8-9 hours of driving.

15 min charge is awesome. But also unnecessary for the vast majority of typical duty cycles.

For commercial trucks and airplanes, this will open new markets.