The French Ministry of the Interior has taken delivery of the first 395 screen-printed PEUGEOT 3008 Plug-in Hybrids for the Gendarmerie Nationale. The rechargeable hybrid systemÚ will now be used in screen-printed intervention vehicles, in addition to a rollout of unmarked versions in 2020. 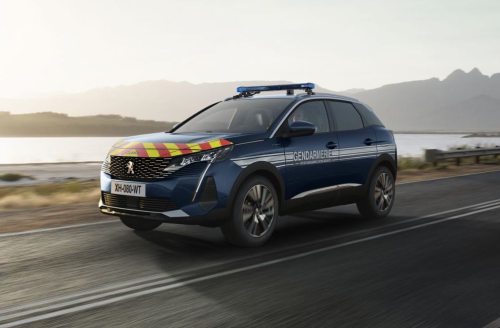 These new deliveries are a sign that the 3008 Plug-in Hybrids meet the specifications of a demanding organization in terms of reliability and performance, as well as good residual value, PEUGEOT said.

This order is also in line with the fleet’s electrification approach and the push to equip it with vehicles manufactured in France and offering the best level of performance. With a cumulative power of 225 bhp, a torque of 360 N·m and the discreet approach capability during patrols in electric mode, the Gendarmerie’s 3008 Hybrids are an important development for intervention vehicles.

The 395 vehicles have the following characteristics:

The vehicles are manufactured for the Ministry of the Interior at the Stellantis factory in Sochaux, and converted by the EGP in Hordain, the bodywork manufacturer referenced for all of the Group’s screen-printed vehicles. Additional supplies are already planned for the first quarter of 2022 for the Gendarmerie and the Police.

The Gendarmerie Nationale is one of two French national police forces; it is a branch of the French Armed Forces placed under the jurisdiction of the Ministry ofd the Interior, and focuses on policing smaller towns, rural and suburban areas. Because of its military status, the Gendarmerie also fulfills a range of military and defense missions.