Damen Shipyards Group handed over three new electric-powered patrol boats in a series to the city of Amsterdam and the Amsterdam Police. The Waterpieper and Waterhoen will sail under the name of the City of Amsterdam and are outfitted with a battery pack of 273 kWh from EST-Floattech, a provider of maritime energy storage systems. These are full electric patrol boats. 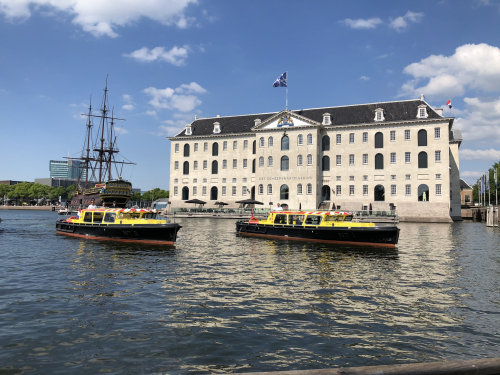 The hybrid P55 will be sailed by the Amsterdam Police and is fitted with a 136.5 kWh battery pack.

The 1304 Damen design is 13.5 metres long and can reach a speed of 8.6 knots with their 130kW electric motors. Sailing at average speed will allow full-day operations on a single charge of the batteries. The P55 also has a diesel generator to extend its range if needed.

It was a tough puzzle to get 273 kWh of batteries on board the 13.5 meter long patrol boat, but the flexible modular system of EST-Floattech enables this in a very space-efficient way.

In 2023 Damen will delivery another two patrol boats of the 1304 full electric series and these will also be equipped with the Green Orca 1050 series of 273 kWh each.

pl give some details of battery , what type is it etc.

These boats appear to have a limited LE function