Start of operations is planned for this year, first sites are set to begin construction in 2023. Initial funding is expected to be approximately $650 million (approx. €580 million) divided equally among the three parties. 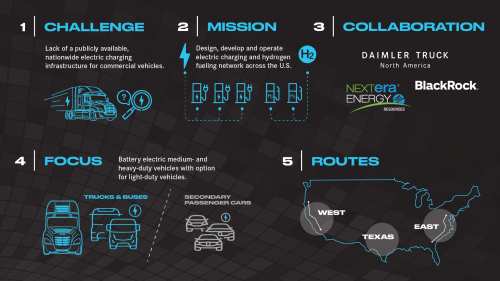 This planned joint venture is the latest in a line of partnerships proving Daimler Trucks’ continuous efforts to align strategically with top-tier players in the field of key transformation technologies.

In the area of electric charging or hydrogen refueling infrastructure along important transport routes, Daimler Trucks collaborates with Shell, BP and TotalEnergies. Partnerships with Siemens Smart Infrastructure, ENGIE and EVBox Group as well as PowerElectronics in battery-electric charging contribute to enabling the economic use of CO2-neutral trucks in driving operations. Moreover, the planned joint venture with the TRATON GROUP and Volvo Group for a European high-performance charging network will also make a contribution to paving the way for a carbon-neutral transport industry.

As in Europe, the lack of a publicly available, nationwide electric charging infrastructure for commercial vehicles in the US, especially for long-haul freight operations, remains one of the biggest barriers for widespread deployment of electric trucks. With formation of this JV, the three parties will be pooling their resources to address this challenge.

The parties plan to build a network of charging sites on critical freight routes along the east and west coasts and in Texas by 2026, leveraging existing infrastructure and amenities while adding complementary greenfield sites to fulfill anticipated customer demand. Initial focus will be on charging stations for battery electric medium- and heavy-duty vehicles followed by hydrogen fueling stations for fuel cell trucks. The sites will also be available for light-duty vehicles to serve the greater goal of electrifying mobility.

Daimler Truck affiliate DTNA offers not only the expertise of developing electric trucks (start of production of battery electric Freightliner eCascadia and eM2 in 2022/23), but also the experience of providing consultant services to its customers, the large fleet operators in North America. In cooperation with the local utility company Portland General Electric (PGE), DTNA opened the first-of-its-kind public charging site for commercial vehicles in the US in Portland, OR.

NextEra Energy Resources is a significant investor in electric infrastructure and brings experience optimizing renewable energy and grid integration. BlackRock Renewable Power operates one of the largest renewable power equity investment platforms in the world. BlackRock’s Global Renewable Power group seeks to invest across the spectrum of renewable power and energy transition supporting infrastructure globally, with over $9.5 billion in total commitments and investments in over 350 wind and solar projects across 15 countries and 5 continents. BlackRock’s Renewable Power group is a part of BlackRock Real Assets.