The steel will be used in standard production of cars at the BMW Group’s European plants from 2026 onwards, eventually reducing CO2 emissions by up to 400,000 tons per year.

This is an important step in substantially reducing CO2 emissions at source in the supplier network. Our aim is to reduce vehicles’ lifecycle carbon footprint with a holistic approach. With steel, in particular, we are leading the way by sourcing low-carbon steel for our plants in Europe in the future.

—Joachim Post, member of the Board of Management of BMW AG responsible for Purchasing and Supplier Network

The BMW Group will also source steel produced using hydrogen and green power from northern Sweden for its European plants from 2025 onwards, reducing CO2 emissions by up to 95%. BMW Group press plants in Europe process more than half a million tons of steel per year. 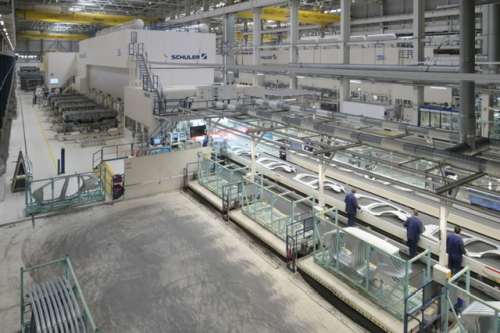 Side frame production in the press shop at BMW Group Plant Leipzig.

Due to its energy-intensive manufacturing process, steel production generates high CO2 emissions. However, because of its versatility, steel is one of the most important materials for car production and will continue to account for a large proportion of the body and many components.

To lower CO2 emissions from steel production on a massive scale, Salzgitter AG is gradually switching the production of steel to a hydrogen-based route under its SALCOS (SAlzgitter Low CO2-Steelmaking) transformation program.

Electricity from renewable sources and its use in production of hydrogen from electrolysis are key elements of the transformation. This green hydrogen will replace the coal currently used in the conventional blast-furnace process. This is made possible by direct reduction plants, which use hydrogen to directly reduce iron ore to iron in the solid state. The solid iron produced in this way is then melted down with steel scrap in an electric arc furnace powered by renewable electricity.

Salzgitter AG plans to use this method to gradually reduce CO2 emissions from steel production to just 5% of what they originally were.

Closed loop conserves resources and reduces CO2 emissions. The BMW Group already established a closed-loop material cycle for sheet steel waste from BMW Group Plant Leipzig with Salzgitter AG more than five years ago. After delivering steel coils to the plant, Salzgitter AG takes away steel remnants of the kind produced at press plants, for example, when doors are punched out, and uses this material to produce new steel. This steel is then supplied to the BMW Group plants. In this way, raw materials can be used multiple times in a circular economy, thereby conserving natural resources.

Sheet steel waste from the BMW Group’s other European plants is also either reused through a direct material cycle or sent back to the steel producer via steel traders and processed into new steel.

Since this requires significantly less energy, CO2 emissions from production of secondary steel are an average of 50-80% lower than from primary steel.

Boston Metal investment. In addition to sourcing low-carbon steel, the BMW Group has also invested in an innovative method for carbon-free steel production developed by American startup Boston Metal, through its venture capital fund, BMW i Ventures. (Earlier post.) Boston Metal uses molten oxide electrolysis to produce molten iron that is later processed into steel. If electricity from renewable energies is used for this process, then steel production is carbon-free. Over the coming years, Boston Metal plans to expand the new method for steel production on an industrial scale.

I was going to point out that there may be a better way to make clean or green iron/steel than using hydrogen as a reducing agent and that is direct molten oxide electrolysis. But when I went to Boston Metals website to see how they are progressing, I saw that BMW had invested in Boston Metals so it is more than obvious that they are watching this development. An then reading the above article, the BMW investment in Boston Metals is mentioned in the last paragraph. Kudos to BMW!