University of Delaware engineers have demonstrated an effective way to capture 99% of carbon dioxide from the ambient air feed to an hydroxide exchange membrane fuel cell (HEMFC) air using a novel electrochemical system powered by hydrogen.

It is a significant advance for carbon dioxide capture and could bring more environmentally friendly fuel cells closer to market. The research team, led by UD Professor Yushan Yan, reported their method in Nature Energy.

The alkaline environment of hydroxide exchange membrane fuel cells (HEMFCs) potentially allows use of cost-effective catalysts and bipolar plates in devices. However, HEMFC performance is adversely affected by CO2 present in the ambient air feed.

Here, we demonstrate an electrochemically driven CO2 separator (EDCS) to remove CO2 from the air feed using a shorted membrane that conducts both anions and electrons. This EDCS is powered by hydrogen like a fuel cell but needs no electrical wires, bipolar plates or current collectors, and thus can be modularized like a typical separation membrane.

We show that a 25 cm2 shorted membrane EDCS can achieve >99% CO2 removal from 2,000 standard cubic centimeters per minute (sccm) of air for 450 hours and operate effectively under load-following dynamic conditions. A spiral-wound EDCS module can remove >98% CO2 from 10,000 sccm of air. Our technoeconomic analysis indicates a compact and efficient module at >99% CO2 removal costs US$112 for an 80 kWnet HEMFC stack.Shi et al.

Yan, Henry Belin du Pont Chair of Chemical and Biomolecular Engineering, has been working for some time to improve hydroxide exchange membrane fuel cells (HEMFCs); Yan’s research group has been searching for a workaround for the carbon dioxide conundrum for more than 15 years. 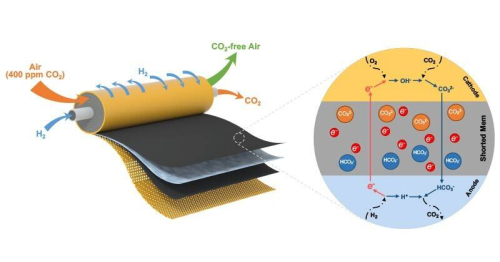 The UD research team’s spiral-wound module takes in hydrogen and air through two separate inlets (shown on the left) and emits carbon dioxide and carbon dioxide-free air (shown on the right) after passing through two large-area, catalyst-coated shorted membranes. The inset image on the right shows, in part, how the molecules move within the short-circuited membrane. Source: University of Delaware

A few years back, the researchers realized this disadvantage might actually be a solution for carbon dioxide removal.

Once we dug into the mechanism, we realized the fuel cells were capturing just about every bit of carbon dioxide that came into them, and they were really good at separating it to the other side.

While this isn’t good for the fuel cell, the team realized that if they could leverage this built-in “self-purging” process in a separate device upstream from the fuel cell stack, they could turn it into a carbon dioxide separator.

The team found a way to embed the power source for the electrochemical technology inside the separation membrane. The approach involved internally short-circuiting the device.

It’s risky, but we managed to control this short-circuited fuel cell by hydrogen. And by using this internal electrically shorted membrane, we were able to get rid of the bulky components, such as bipolar plates, current collectors or any electrical wires typically found in a fuel cell stack.

—Lin Shi, a doctoral candidate in the Yan group and the paper’s lead author

The electrochemical device looked like a normal filtration membrane made for separating out gases, but with the capability to continuously pick up minute amounts of carbon dioxide from the air like a more complicated electrochemical system.

In effect, embedding the device’s wires inside the membrane created a short-cut that made it easier for the carbon dioxide particles to travel from one side to the other. It also enabled the team to construct a compact, spiral module with a large surface area in a small volume. In other words, they now have a smaller package capable of filtering greater quantities of air at a time, making it both effective and cost-effective for fuel cell applications. Meanwhile, fewer components mean less cost and, more importantly, provided a way to easily scale up for the market. 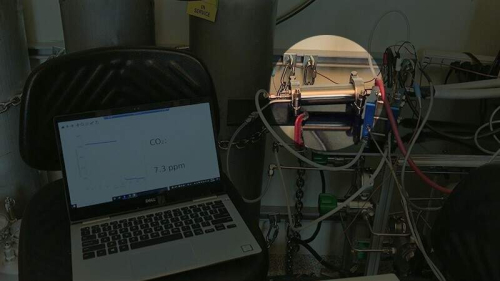 This picture shows the electrochemical system developed by the Yan group. Inside the highlighted cylindrical metal housing shown is the research team’s novel spiral-wound module. As hydrogen is fed to the device, it powers the carbon dioxide removal process. Computer software on the laptop plots the carbon dioxide concentration in the air after passing through the module.

The research team’s results showed that an electrochemical cell measuring 2 inches by 2 inches could continuously remove about 99% of the carbon dioxide found in air flowing at a rate of approximately two liters per minute. An early prototype spiral device about the size of a 12-ounce soda can is capable of filtering 10 liters of air per minute and scrubbing out 98% of the carbon dioxide, the researchers said.

Scaled for an automotive application, the device would be roughly the size of a gallon of milk, Setzer said, but the device could be used to remove carbon dioxide elsewhere, too. For example, the UD-patented technology could enable lighter, more efficient carbon dioxide removal devices in spacecraft or submarines, where ongoing filtration is critical.

According to Shi, since the electrochemical system is powered by hydrogen, as the hydrogen economy develops, this electrochemical device could also be used in airplanes and buildings where air recirculation is desired as an energy-saving measure. Later this month, following his dissertation defense, Shi will join Versogen, a UD spinoff company founded by Yan, to continue advancing research toward sustainable green hydrogen.

Co-authors on the paper from the Yan lab include Yun Zhao, co-first author and research associate, who performed experimental work essential for testing the device; Stephanie Matz, a doctoral student who contributed to the designing and fabrication of the spiral module, and Shimshon Gottesfeld, an adjunct professor of chemical and biomolecular engineering at UD. Gottesfeld was principal investigator on a 2019 project, funded by the Advanced Research Projects Agency-Energy (ARPA-E), that led to the findings.

This may actually prove to be a probate method to remove all of the excess CO2 in the earth's atmosphere.

They are talking about fairly specialized applications there - fuel cells, spacecraft and submarines.
I don't think it would scale to a level where you could scrub the atmosphere.
Still, interesting.

Interesting but I do think that it will replace photosynthesis for efficient and cost effective CO2 removal.

My bad. It should be DO NOT!

A gallon sized device for automotive? A CO2 catalytic converter?

Stop putting so much CO2 into the air

@GdB, this device seems to separate out the CO2 from the air into a separate stream of pure CO2 and does not change the CO2 into something else. So in theory, you could sequester the carbon dioxide. However for this is not a very practical concept. Assuming gasoline is octane (it is actually a mix of heptane, octane, and other hydrocarbons but the assumption is not going to be that far off), burning one molecule of octane will produce 8 molecules of carbon dioxide. As the molecular weight for octane is 114 and the molecular weight for CO2 is 44, the 8 molecules of carbon dioxide will have a total molecular weight of 352 or more than 3 times the mass of the gasoline. So if you burn a kilogram of gasoline, you end up with more than 3 kilograms of CO2 which is a gas that would need to be compressed or liquified.

As I said, the device is interesting but I am really not sure what the practical applications are. As far as the atmosphere is concerned, SLC has the better solution -- "Stop putting so much CO2 into the air."