BNEF: electrolyzer sales more than doubled in 2021, set to grow 4-5x this year

BloombergNEF has just published its hydrogen market outlook for the first half of 2022. Among its findings are that annual government funding for hydrogen has reached $16 billion per year globally, up 40% from July 2021. This puts it two-thirds of the way to where it needs to be in order for clean hydrogen to play a strong decarbonizing role in the economy.

Electrolyzer sales have more than doubled to 458MW in 2021 and are set to grow 4-5x this year. Almost two-thirds of these sales will happen in China. Globally, BNEF’s database now tracks 122GW of planned electrolyzer projects, up from 50GW in July 2021.

Clean hydrogen demand is about to shoot up due to 10 industrial projects slated to come online in 2022. Two projects in China plan to use more than 40,000 metric tons of clean H2 this year—several times more than all of the world’s hydrogen cars combined.

Stronger policies favoring decarbonization will be needed to keep the growth going, BNEF said. Crucially, these include higher carbon prices in sectors where hydrogen could play a strong role, such as ammonia, methanol, oil refining, iron and steel. 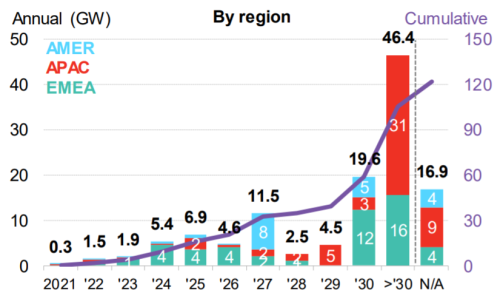 The amount of government funding becoming available to hydrogen keeps growing rapidly. At this pace, we are likely to see more than enough public money committed in a year or two from now to get the sector on track for strong growth and cost reduction by 2030.