EIA: EVs and hybrids accounted for 11% of US light-duty vehicle sales in Q4 2021

Hybrid, plug-in hybrid, and electric vehicle sales in the Unites States have increased in recent months as sales of non-hybrid internal combustion engine (ICE) vehicles fueled by gasoline or diesel decreased. In the fourth quarter of 2021, hybrid, plug-in hybrid, and electric vehicles collectively accounted for 11% of light-duty vehicle sales in the United States, according to data from Wards Intelligence, the US Energy Information Administration (EIA) reported. 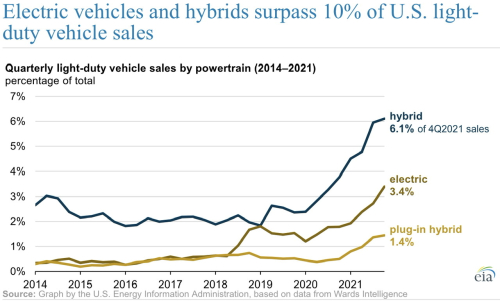 Graph by the US Energy Information Administration, based on data from Wards Intelligence

Source: Graph by the U.S. Energy Information Administration, based on data from Wards Intelligence

Manufacturers of hybrid vehicles and plug-in vehicles have expanded into market segments such as crossovers, vans, and pickups following consumer preference for larger vehicles. Within each electric or hybrid powertrain type, crossover vehicles now account for most sales.

Source: Graph by the U.S. Energy Information Administration, based on data from Wards Intelligence

It is ironic that people have responded to more efficient drive trains by buying larger vehicles.
I guess that is a simple (and predictable) rebound effect.
Higher gasoline prices might cause people to rethink, however, but once a vehicle has been purchased, it will continue to be used for ~15 years (by several owners, probably), so the damage is done.
And if they ever get Level 4 or 5 autonomous vehicles working properly, people will live even further from their places of work as they can work, surf or sleep on the way in and out from work.
Lucky that "global warming" problem has been superseded by "Covid" and "Ukraine" and we don't have to worry about it any more.
(Dodged a bullet there!)