Snow Lake Lithium also plans to establish a joint venture to create a lithium hydroxide processing plant and is seeking a partnership with an automotive OEM or a battery manufacturer to deliver this. 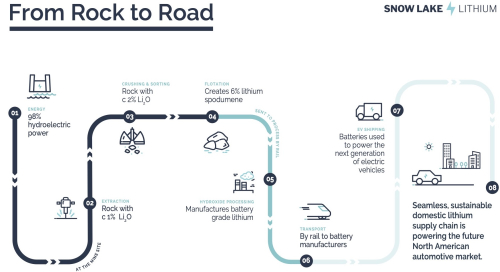 We are facing a once-in-a-century industrial pivot as North America accelerates towards an electrified future. If we don’t act now to secure a seamless lithium supply chain from rock to road, the North American car industry will not exist in 10 years’ time.

Our ambition is to become the first fully integrated, carbon neutral lithium hydroxide provider to the North American electric vehicle industry. We are developing the world’s first all-electric lithium mine, operated by renewable power, and are currently looking for a joint venture partner to create a lithium hydroxide processing plant in the region.

Based in Manitoba, Snow Lake Lithium is located to serve the North American automotive industry with access to the US rail network via the Artic Gateway railway, which reduces transportation from thousands of miles by road and boat to just several hundred by train. 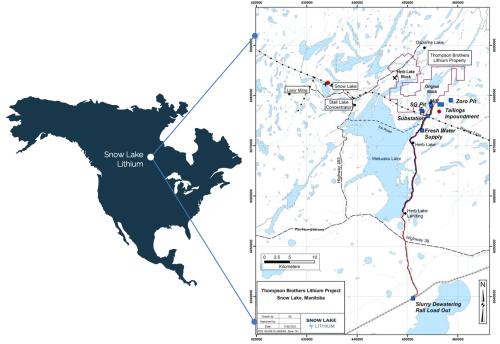 Snow Lake Lithium recently expanded its holdings around its current resource block at the Thompson Brothers Lithium Project in Manitoba. The company, with the assistance of an external consultant, has been engaged over the past several years in the analysis of historic geological data, diligence and in depth “in-the-field” prospecting campaigns. These efforts culminated in the acquisition, through the staking and filing of claims with the Manitoba Mineral Resources Division, of mineral rights on an additional 33,614 acres (13,603 ha) which the company believes is highly prospective of lithium.

The wholly owned Thompson Brothers Lithium Project now covers a 55,318-acre site (86.43 square miles) that has only been 1% explored and contains an identified-to-date 11.1 million metric tonnes indicated and inferred resource at 1% Li2O.

The Thompson Brothers deposit has been drill-tested 1km along strike and to a vertical depth of 0.5 km; mineralization averages 7 to 10m in thickness. The lithium mineralization occurs as spodumene, a coarse-grained mineral rich in lithium. The lithium hosted in spodumene can be sustainably processed into either lithium hydroxide or lithium carbonate.

The drilling results have delivered consistent lithium grades. The company says that there is the potential to develop a small surface starter pit on the crown pillar of the deposit followed by ramp access and underground bulk mining methods.

Snow Lake Lithium’s site is expected to produce 160,000 tonnes of 6% lithium spodumene a year over a 10-year period. Snow Lake Lithium’s mine will be operated by almost 100% renewable, hydroelectric power to ensure the most sustainable manufacturing approach.

Over the coming months, Snow Lake Lithium will continue its engineering evaluation and drilling programme across its Thompson Brothers Lithium Project site, with the expectation that the mine will transition to commercial production in late 2024.