Rolls-Royce, Porterbrook and Chiltern Railways have put a hybrid diesel-battery-electric train that reduces CO2 emissions by up to 25% into passenger service in the UK. The HybridFLEX train is powered by two mtu Hybrid PowerPacks and is operated by Chiltern Railways on the route between London Marylebone and Aylesbury. 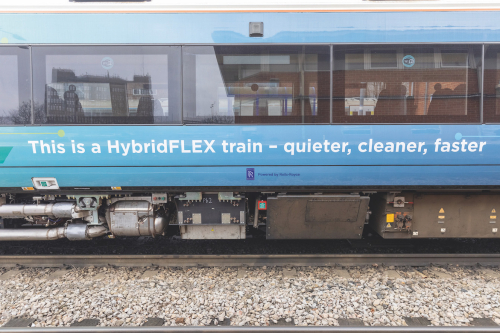 Together with the leasing company Porterbrook and Chiltern Railways, Rolls-Royce has converted a Class 168 DMU into the HybridFLEX train. The partners are proving that existing rail vehicles can be used in a climate-friendly way without the need to install complex and expensive new infrastructure. It is the world’s first regular passenger operation with mtu Hybrid PowerPacks, of which 13 have already been ordered. The Hybrid PowerPack combines a diesel engine, which complies with the EU Stage V emissions directive, with an electric machine, which can be used either as an electric motor or generator, and an mtu EnergyPack battery system, which stores the energy recovered during braking.

In pure electric operations, drive noise is reduced by about 75% (20 dB(A)). Recuperated braking energy is stored in a battery, the mtu EnergyPacks. In the HybridFLEX, the batteries are mounted under the floor of the vehicle.

A new type of driver assistance system, the mtu Intelligent Drive Manager, is being used on this train for the first time. It ensures that the drive system automatically switches to all-electric operation in emission- and noise-sensitive areas such as cities or train stations. The driver does not have to intervene.

The Rolls-Royce business unit Power Systems with its mtu products and solutions brand, is leading the company’s way towards net zero as a provider of low-emission drive and energy solutions.

From 2023, Rolls-Royce Power Systems will approve its mtu Series 2000 and 4000 engines for sustainable fuels such as synthetic diesel (second-generation biofuels or e-diesel), thus enabling climate-neutral operation in almost all applications. In addition to hybrid systems and the use of sustainable fuels, the company is also working on future technologies such as CO2-free fuel cell systems and hydrogen engines. Digital solutions for controlling, monitoring and servicing systems are also set to help reduce CO2 emissions.