Airbus has signed a partnership agreement with CFM International, a 50/50 joint company between GE and Safran Aircraft Engines, to collaborate on a hydrogen demonstration program that will take flight around the middle of this decade.

The program’s objective is to ground- and flight-test a direct combustion engine fueled by hydrogen, in preparation for entry-into-service of a zero-emission aircraft by 2035. The demonstration will use a A380 flying testbed equipped with liquid hydrogen tanks prepared at Airbus facilities in France and Germany. Airbus will also define the hydrogen propulsion system requirements, oversee flight testing, and provide the A380 platform to test the hydrogen combustion engine in cruise phase.

The ZEROe Demonstrator flying testbed is the A380 MSN1—the first A380 to roll off Airbus’ production line.

The A380 MSN1 is an excellent flight laboratory platform for new hydrogen technologies. It’s a safe and reliable platform that is highly versatile to test a wide range of zero-emission technologies. In addition, the platform can comfortably accommodate the large flight test instrumentation that will be needed to analyze the performance of the hydrogen in the hydrogen-propulsion system.

CFM International (CFM) will modify the combustor, fuel system, and control system of a GE Passport turbofan to run on hydrogen. The engine, which is assembled in the US, was selected for this program because of its physical size, advanced turbo machinery, and fuel flow capability. 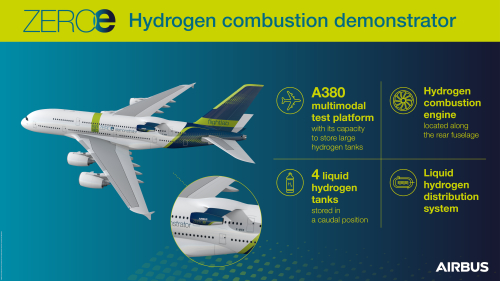 It will be mounted along the rear fuselage of the flying testbed to allow engine emissions, including contrails, to be monitored separately from those of the engines powering the aircraft. CFM will execute an extensive ground test program ahead of the A380 flight test. 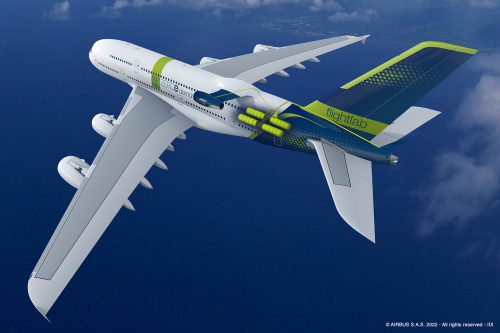 This is the most significant step undertaken at Airbus to usher in a new era of hydrogen-powered flight since the unveiling of our ZEROe concepts back in September 2020. By leveraging the expertise of American and European engine manufacturers to make progress on hydrogen combustion technology, this international partnership sends a clear message that our industry is committed to making zero-emission flight a reality.

Hydrogen combustion capability is one of the foundational technologies we are developing and maturing as part of the CFM RISE Program. Bringing together the collective capabilities and experience of CFM, our parent companies, and Airbus, we really do have the dream team in place to successfully demonstrate a hydrogen propulsion system.

CFM shares Airbus’ ambition of fulfilling the promise they made in signing the Air Transport Action Group goal in October 2021 to achieve aviation industry net-zero carbon emissions by 2050 by developing and testing the technology necessary to make zero emissions aircraft a reality within the ambitious timeline defined.

With four engines, how hard would it be to convert two to run H2 and leave 2 on conventional JetA? A380 without the rest of cargo/passenger weight should be able to operate on 2 engines to some extent. This could also give data on thrust response and capacity in various operating conditions .

I still want to see a hybrid jet engine that is part electric, part combustion....

In eight to ten years, the aneutronic HB11 fusion reactor will be ready to enter mass production. It shouldn't be too difficult to integrate this reactor into a plane this size for a full electric drive; I'd invest in this idea but never in H2.

The energy density of kerosene is about 12,000 Wh/kg while H2 is about 32,000; it will be interesting to see if there are any gains burning H2 and what are the downsides. Will Nox now be a problem?
Also, a switch to H2 should satisfy the oil and gas companies desire to keep their hydrocarbon reforming processes in the mix.

Some Ammonia could be injected to after treat the NOx.

@Jason,
I'm sure what you suggested would be the next step. The first step is to modify a single small turbofan to gain experience before modifying a giant engine that would be much more costly.
There is no major advantage to a hybrid electric jet engine in a multi-engine aircraft, because if part-load is needed, 1 or more engines can be shut-down, for example, during the descent for landing. For cruise at cruising altitude, the engines are run at high load due the thin air at those altitudes, so they are already running at their maximum efficiency already.

@SJC,
Fuel cells can be used to provide on-board electricity during waiting on ramp and during taxiing toward the runway using electric motors to power the wheels, because FC is far more efficient than turbofan engine running at low-load, but there is little advantage to a hybrid electric turbofan engine.

@Lad,
Indeed, the very lightness of LH2 can nearly double the fuel efficiency per pound of payloads for long-range jetliners. This can significantly offset the initial higher price of LH2 per BTU of fuel energy, increasing the incentive for adoption of LH2 for air transportation that may be cost-competitive with petroleum fuel. Thus, the oil and gas companies would surely want to get on board to protect their business.

Replacing one or two of the existing engines with hydrogen counterparts would only make sense, if you were trying to develop an engine of this size.

Until now I have only seen hydrogen-fuels planes suggested for routes up to 2,000 nm, and then without any windows after the wings, suggesting a halving of passenger capacity. Long haul flights load significantly more fuel and would have to cut the passenger count to zero to fly on hydrogen ;-)

The engines tested here correspond to a smaller, regional plane.

Using hydrogen makes the plane a lot less efficient. From an efficiency - and commercial - point of view, it's better to take the efficiency hit on the ground and convert the hydrogen to a hydrocarbon liquid fuel.

Why on earth would you carry ammonia to reduce NOx in a hydrogen engine?  Ammonia (and urea) are just hydrogen sources, to burn the oxygen off the NOx catalyst.

Ramping up sustainable jet fuel seems to be the lighter technical lift than cryo-tanks and altered jet engines. That can get you to carbon neutral. NOX abatement can also be enhanced since you have more control of the feedstocks than you do with petroleum refining. I would guess jet manufacturers and their customers would far prefer the former than the latter. Capital is cowardly and 'drop-in replacement' is a comforting phrase.

@Yoatmon. I admire your optimism. I presume you're referring to SAE. They've built a bunch of machines, performed a bunch of experiments, published some papers, but have yet to fuse a single thing. To some extent this is understandable. Tritium is easiest to fuse, then D-T, but these make neutrons that damage your machines and give your lab radiation hazards and radioactive material to contend with. So they run experiments that don't fuse anything and compare their data with that from JET and other experiments, which have been fusing plasmas for decades.
Their upcoming Copernicus machine is designed to "simulate net energy production from the D-T fuel cycle" (website's FAQ) so they're still not proposing to actually FUSE anything with it. FAE apparently think they can scale to aneutronic fusion without a hitch so they'll never have to contend with neutrons, and I wish them luck. Thing is, H-B11 fusion is WAY harder than D-T and we're barely able to achieve D-T on lab scale. I'm more hopeful about the HB11 Energy guys, using lasers and kilotesla fields. At least they have actually fused some H-B11 and published papers explicitly on H-B11 fusion, which SAE doesn't seem to have done.

LH2 produces no aerosol particles. LH2 ice crystals, which instead form on background
aerosol, are consequently 1–2 orders of magnitude fewer than in a kerosene contrail
https://agupubs.onlinelibrary.wiley.com/doi/pdf/10.1029/2001JD000838