Jointly developed between NASA and CoFlow Jet, LLC., the technology would allow aircraft to take-off vertically, hover, smoothly transition to cruise and land vertically without using tiltrotors, tiltwings, or lift plus configuration. This would substantially simplify the vehicle system, reduce weight, increase range, save energy, and decrease noise.

It would also combine vertical and short takeoff-landing (V/STOL), which facilitates aircraft to operate vertically within confined urban settings and further saves energy where there is a short runway space.

The basic concept of the proposed co-flow jet airfoil developed by the company is an active-flow control airfoil actuated by micro-compressors embedded inside the airfoil. A small amount of mass flow is drawn into the airfoil at the trailing edge, pressurized by the micro-compressor actuators and then injected near the leading edge tangential to the main flow. The result is a high lift system that can achieve a super-lift co-efficient at extremely low energy expenditure. 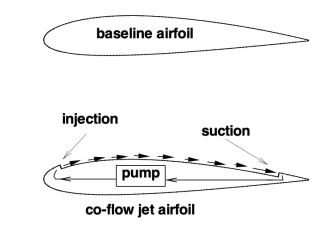 We are developing advanced fully electric vertical and short takeoff and landing (eV/STOL) vehicles using DSS enabled by CFJ, which will make urban transportation and eCommerce economically viable. Tiltrotors, tiltwings, and lift plus may soon be part of history. Such a vehicle could also be used on Mars as it could generate nearly 10 times higher cruise lift coefficient compared to existing fixed wing aircraft, making it the most effective vehicle not only here on Earth but also on Mars where the air density is one-hundredth that of earth.

—Dr. Gecheng Zha, CEO of CoFlow Jet, and professor at the University of Miami 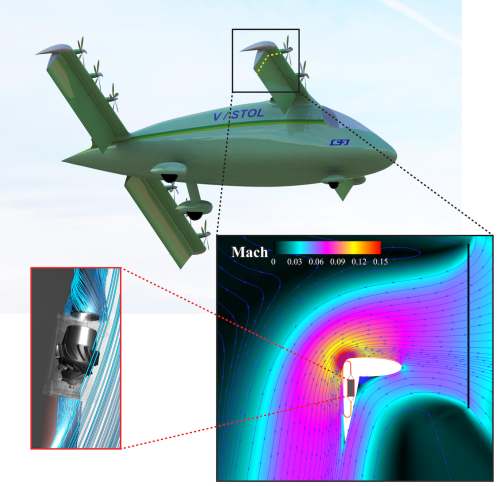 Concept vehicle. The vehicle is shown above hovering with its flaps pointing downward and its propellers facing forward. The airflow from the propellers is turned vertically downward (see right inset) converting the entire thrust from the propellers to vertical lift. Unlike most of the current VTOL vehicles, the lift is generated without rotating the propellers upward. The 90 degree turn in the airflow is enabled by the coflow jet micro-compressors embedded in the flaps of all four wings (see left inset).

Once airborne, the flaps are rotated to align flush with the wings to provide smooth cruise flight. 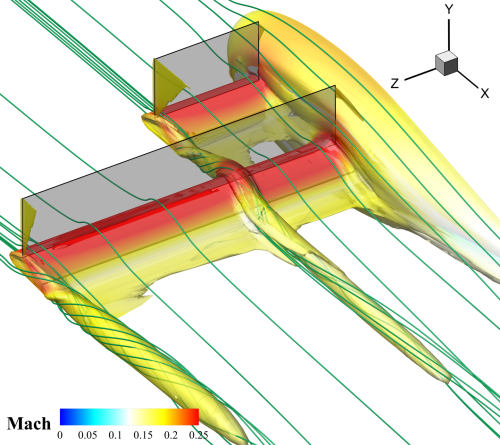 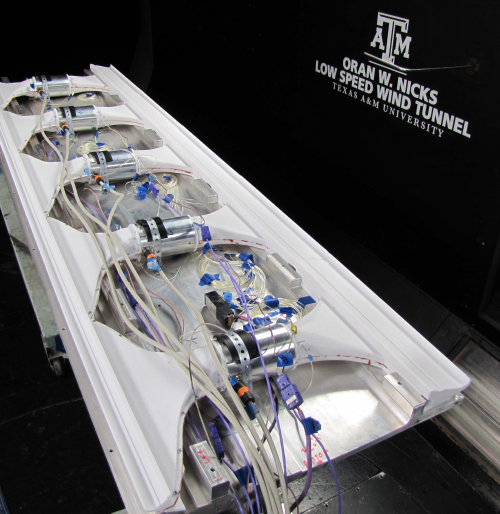 The picture above shows the micro-compressors embedded inside a CFJ wing that was recently tested in a DARPA funded wind tunnel experiment.

Overall a CFJ-enabled vehicle would enjoy high safety, long range, high efficiency, and low noise. Currently, the eV/STOL air vehicle preliminary design is complete and the company is seeking investors to join them in prototype manufacturing and flight demonstration. Morgan Stanley projects the eVTOL market to be $1 trillion by 2040 and $9 trillion by 2050.

The physics don't add up here. An aircraft achieves lift by directing air downward, with the two operative laws of physics being (1) F = m*a, and (2) every action has an equal and opposite reaction. The upward force on the aircraft equals the mass times the acceleration of the air directed downward. Directing air in a closed loop over and through the wing does not generate any lift.

NASA seems to think it does

You're wrong, Allen.  Shape drag forms a boundary layer across any surface next to a moving fluid, which gets thicker and slower the further it flows.  It is more energy-efficient to suck up (and push against) this slow-moving boundary layer than the faster-moving bulk flow around an aircraft, and introducing a fast-moving stream near the leading edge keeps the bulk flow next to it from slowing down as it crosses the top of the airfoil.  This has been proven in multiple experiments, including in actual aircraft.

It might reduce drag when the aircraft is moving, but it's not going to provide lift for vertical takeoff.

A good way to think of this is it reduces losses in lift, greatly improving the airfoil efficiency.

Allen - you're correct as far as the physics is concerned, but what is happening here is quite subtle. The lift force generated arises from the mass and velocity of air deflected downwards - F=ma, as you say. However, energetically, for the same thrust it's more efficient to move a larger mass of air at lower velocity (you're putting kinetic energy into that air, which is proportional to the square of the velocity). If you consider a Dyson "bladeless" fan, air pulled through the pump intake and expelled through the rim drags a much larger mass of air through the rim, which adds to the thrust. This tech allows the air directly accelerated by the props to add velocity to a larger mass of air than they otherwise would, which increases the thrust obtained for the same energy.

I want that on my hydrogen car.

Generating lift by pressing air downwards has an associated drag, which is what the propulsion has to overcome. Reducing the boundary layer with this method reduces drag and herein lies the benefit.

When the ratio between lift and drag (L/D) increases, you can generate more lift with the same power.

This looks like a variation of high lift devices,e.g. Upper Surface Blowing, Blown Flaps, Circulation Control Wing, etc. tested by NASA over 20 years ago. These have been successfully employed on a variety of STOL aircraft.

I'd say you would need a strong bearing to tilt the flap down, with the air going over it.
Still, looks interesting.
Doesn't have to be all electric - you could use a turbine generator and distributed electric fans if required.
@Gryff, like the YC14 and YC15 and C17 and the An72.

@mahonj,
That’s right and an experimental A-6 that used the Circulation Control Wing.

Forgot to mention the Shin Meiwa US-1 /US-2 which used an auxiliary turbine for Boundary Layer Control (BLC). NASA and Boeing also worked with the DHC C-8A Buffalo on BLC and augmentor wing concepts.

Something that occurred to me is that the requirement for a passage through the wing for air to flow through back-to-front interferes with things like fuel storage.  It might be more efficient to use two impellers, one to produce the fast-flowing air stream at the front and another at the rear to draw in the boundary layer and just eject it at speed.  Maybe a bit faster to generate some jet thrust.  That would get rid of the internal air ducts.