bp announced in October 2020 that it would cease fuel production at its Kwinana Refinery and convert it to an import terminal, helping to ensure ongoing security of fuel supply for Western Australia. 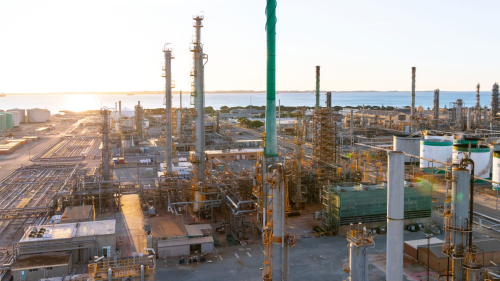 The refinery provided fuels for Western Australia for 65 years. However, the continued growth of large-scale, export-oriented refineries throughout Asia and the Middle East has structurally changed the Australian market, bp noted at the time.

Revamping to Honeywell UOP’s Ecofining process is expected to provide a fast-to-market, capital efficient solution, suited for repurposing underutilized hydroprocessing units to produce diesel and SAF from renewable feeds, which have substantially similar molecules to petroleum-based diesel and jet fuel and can be used as a drop-in replacement without engine modifications—in the case of SAF in blends of up to 50% with the remainder as conventional jet fuel.

Depending on feedstock choice, diesel and SAF produced from the Ecofining process is expected to result in a significant reduction in greenhouse gas emissions compared with conventional diesel or aviation fuel from petroleum. Honeywell helped pioneer SAF production with its UOP Ecofining process, which has been used to produce SAF commercially since 2016.

Honeywell recently committed to achieve carbon neutrality in its operations and facilities by 2035. About half of Honeywell’s new product introduction research and development investment is directed toward products that improve environmental and social outcomes for customers.