European Energy, a Danish developer and operator of green energy projects, has ordered a 50 MW electrolyzer from Siemens Energy for use in developing the first large-scale commercial e-Methanol production facility.

The plan is that the plant will be built in Kassø, located west of Aabenraa in the South of Denmark, near the German border. Through the nearby 300 MW solar park of Kassø, developed by European Energy, the project will have access to the low-cost renewable electricity needed to produce cost-effective e-Fuel. End users of the e-Methanol will be the shipping company Maersk and the fuel retailer Circle K among others. 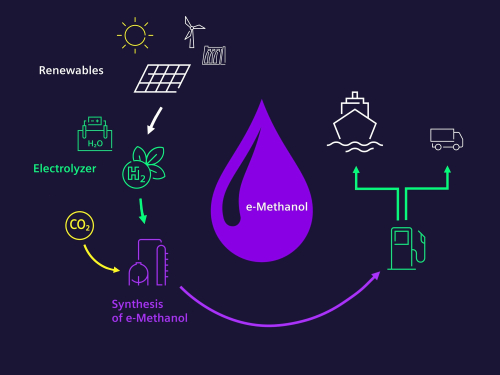 The project secures the e-Methanol supply for Maersk’s first e-Methanol-driven container vessel, and thus demarks the starting point into CO2-neutral shipping in large-scale. Start of commercial methanol production is planned for second half of 2023.

Siemens Energy will design, supply and commission the electrolysis system consisting of three full arrays of its latest and most powerful line of PEM (proton exchange membrane) electrolysis products including transformers, rectifiers, distributed control system (DCS) plus the equipment to produce demineralized water.

European Energy is the owner of the project and will be responsible for the engineering, procurement and construction, as well as for the operation of the facility.

We are pleased to place this important order of what is believed to be the first large-scale commercial Power-to-X-project of its kind in the world. This is a crucial moment in the green transition as we move forward with the decarbonization of hard-to-abate sectors such as the shipping industry, and we trust that Siemens Energy outstanding know-how of electrolyzers will become a strong foundation to expand our business of delivering sustainable fuels to the world.

The global shipping consumes around 3,050 terawatt hours (TWh) of the worldwide final energy consumption. For comparison: This is more than five times the total electricity consumption of Germany. As nearly all is based on fossil fuels, mainly bunker oil, the shipping sector emits about 1,000 million tons of CO2 per year, about 13% of the greenhouse gas emissions from global transport.

What will they do when the sun isn't shining and the wind isn't blowing - will they shut it down and wait, or keep going with whatever is on the grid?
That is a key variable for all e fuels and H2 - how clean is the electricity in real operations, when you are under pressure to produce.
And who will keep track of this ?
Could be a conflict of interests there, IMO.

If the facilities to produce hydrogen are not too expensive, they can just use excess renewable power (middle of a sunny day, for example) and be economical. Hydrogen can be stored, so conversion to methanol can run 24/7.
But that is a big if.

They can't just use grid electricity and sell the product as *green* methanol, which is essential for the business case. They may be able to source electricity from alternative R-E sources via direct PPA (power purchase agreement) but the coming RED II (renewable energy directive) actually prohibits this, unless *additional* R-E capacity (installed +/- 12 months of commissioning of the electrolysis plant) is employed.

The cost of electricity is the all-dominating cost factor for eFuels and using their own solar electricity, they avoid grid tariffs. As long as there is CO2 available, the methanol synthesis process is fully capable of throttling up and down in capacity. Obviously, a small buffer of hydrogen to compensate for a small passing cloud would be feasible.

I have done detailed engineering on a similar project, and there is no fundamental technical challenges.