Home About Contact RSS GCC Twitter Newsletter
Core Lithium and Tesla enter into binding term sheet for the supply of lithium
Sony and Honda sign MOU to create JV to develop and sell EVs and mobility services; first model on sale in 2025

Every time it rains, fish living downstream of storm drains are exposed to pollutants, including the tire-derived compound 6PPD-quinone, in the runoff. Recently, this substance has been linked to massive die-offs of coho salmon across the US West Coast. Now, researchers in Canada report that exposure to 6PPD-quinone at environmentally relevant levels can also be deadly for rainbow and brook trout, though not for Arctic char or white sturgeon. 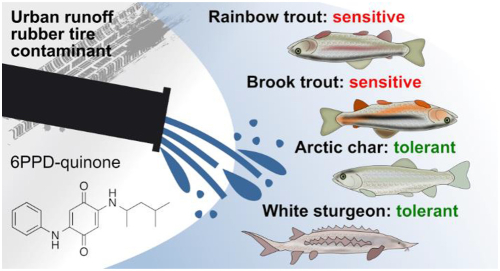 Rubber tires are fortified with protectants, such as N-(1,3-dimethylbutyl)-N'-phenyl-p-phenylenediamine or simply 6PPD. 6PPD is an antioxidant and antiozonant that helps prevent the degradation and cracking of rubber compounds caused by exposure to oxygen, ozone and temperature fluctuation.

6PPD is used industry-wide to help tires resist degradation and cracking. There are no known alternatives to 6PPD that provide the same safety and performance characteristics in a tire, according to the US Tire Manufacturers Association.

However, as the treads wear down and pieces flake off over time, small rubber particles (tire wear particles, TWPs) scatter across roads. There, the particles react with oxidants such as ozone in the air, converting 6PPD to 6PPD-quinone, which washes into waterways along with the source tire particles in stormwater runoff.

Conversely, another study indicated that zebrafish and Japanese medaka can withstand even very high amounts of 6PPD-quinone. So, Markus Brinkmann, Markus Hecker, Steve Wiseman and colleagues wanted to see whether this contaminant poses a risk to a broader range of commercially, culturally and ecologically important fish species.

The researchers exposed juvenile brook trout, rainbow trout, Arctic char and white sturgeon to varying levels of 6PPD-quinone. They found that even small concentrations, such as those regularly occurring in surface waters after stormwater runoff events, were fatal to brook and rainbow trout. The LC50s in brook trout (24 h) and rainbow trout (72 h) were 0.59 and 1.00 μg/L, respectively.

For both trout species, the researchers observed an increased blood glucose level after 6PPD-quinone exposure, suggesting it affected the fish’s energy metabolism pathways. However, none of the Arctic char and white sturgeon died after four days of exposure to a high level of the contaminant that was similar to the maximum amount previously observed in stormwater runoff (14.2 μg/L).

The results indicate mortality from exposure to 6PPD-quinone varies among fish species, but for animals that don’t die, possible non-lethal effects could be occurring and need further examination, the team says.

This project was supported partially by a financial contribution from Fisheries and Oceans Canada. The authors acknowledge additional funding from the Discovery Grants program of the Natural Sciences and Engineering Research Council of Canada (NSERC), Western Economic Diversification Canada (WED), the Canadian Foundation for Innovation, the Banting Postdoctoral Fellowship program of NSERC, the Canada First Research Excellence Funds (CFREF) and the Canada Research Chairs Program.

This begs the question:  how does 6PPD degrade in the environment?  Could we e.g. accelerate its decomposition by seeding stormwater with bacteria?

6PPD can react with ozone under certain conditions to
produce a reaction product implicated in mass die-offs of coho salmon
https://dtsc.ca.gov/wp-content/uploads/sites/31/2021/06/2021-Product-Chemical-Profile-for-Motor-Vehicle-Tires-Containing-6PPD-Discussion-Draft_ADA.pdf

It says that in the first paragraph of the article.

The article link has more information