Australia-based Core Lithium has entered into a legally binding Term Sheet with Tesla for the supply of up to 110,000 tonnes of Li2O spodumene concentrate from the Finniss Lithium Project over a term of 4 years, with pricing referenced to the market price for spodumene concentrate, subject to a price floor and ceiling.

This deal follows Core Lithium’s Board making a Final Investment Decision to commence development of the company’s wholly owned Finniss Project, located near Darwin in the Northern Territory (NT). The company is fully funded to deliver the Finniss Project, which has started construction, through to first lithium concentrate production scheduled for Q4 2022.

The term sheet with Tesla is subject to the parties completing negotiations and execution of a definitive product purchase agreement by 27 August 2022, which is to provide for a supply commencement date before 31 July 2023 (subject to extension by mutual agreement).

The Finniss Project lies within one of the most prospective areas for lithium in Australia’s NT—the Bynoe Pegmatite Field—and covers more than 500 km2 of granted tenements. 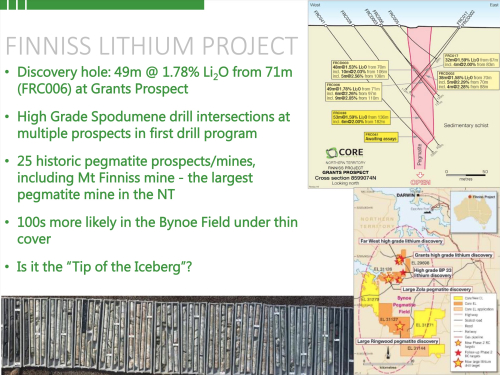 In mid-2021, Core released a Definitive Feasibility Study (DFS) for the Finniss Project, marking a major milestone in its goal to become Australia’s next major lithium producer by the end of 2022. The study highlighted an average production of 173 ktpa of high-quality lithium concentrate at a C1 opex of US$364 per tonne, and at a low start-up capital cost of A$89 million due to the incorporation of a simple Dense Media Separation (DMS) processing plant in the project’s design.

Based on the development of the ore reserves within the Grants and BP33 deposits, standard open pit mining operations and the construction of the simple 1Mtpa DMS process plant, Finniss will have capacity to produce up to 197 ktpa of lithium concentrate with robust margins.

With a modest pre-production capex of $89 million, strong cashflows and a quick capital payback period of two years, the Finniss Project could become one of the lowest capital intensity lithium projects in Australia.

China’s Sichuan Yahua Industrial Group (Yahua) has committed to 75,000 tpa of product from Finniss over an initial four-year period, with extension options attached. In early 2021, Yahua also signed a deal to supply battery-grade lithium hydroxide to US EV manufacturer Tesla over the next five years.

Core’s strategy for Finniss currently includes a potential Stage 3 expansion. Stage 3 is based on a longer-term plan for the development of downstream lithium chemical processing in the Northern Territory.

Tesla has agreed, subject to execution of a definitive agreement, to provide additional support to Core to assist with the successful completion of its Stage 3 Expansion and the incorporation of Core’s lithium chemical product into Tesla’s supply chain.