Austrian bus company Österreichische Postbus AG (ÖBB Postbus) has signed another framework agreement with Solaris for the delivery of up to 106 battery-electric and hydrogen buses that would be deployed throughout Austria. The models offered include Urbino 9 LE electric and Urbino 12 hydrogen buses.

ÖBB Postbus is the largest bus company in Austria and a leader in regional public bus transport. Possible orders are to be fulfilled in the years 2022-2025 with an option to prolong this period until 2028.

Buses to be purchased by ÖBB include up to 24 of the latest, zero-emission Urbino 9 LE electric buses, and up to 82 Urbino 12 hydrogen buses. 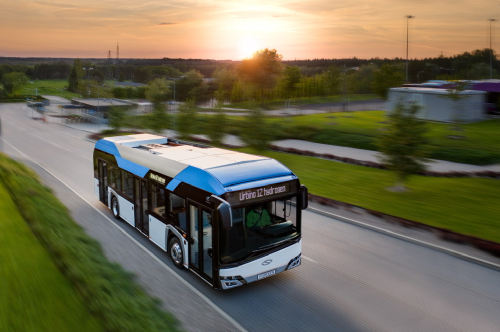 The framework agreement is yet another agreement for hydrogen buses concluded between Österreichische Postbus AG und Solaris. The previous contract signed in February 2021 assumed, among other things, the delivery of up to 40 Solaris Urbino 12 hydrogen buses.

The energy that powers the hydrogen buses is generated by 70 kW fuel cell systems.The hydrogen needed to propel the bus will be stored in gaseous form in five tanks with a total volume of 1560 liters, mounted on the bus’s roof. Additionally, every ordered vehicle will be equipped with a Solaris High Power battery.

The contract also provides for the possibility to purchase Urbino 9 LE electric buses, the youngest member of the electric Solaris family, which was launched in September 2021. This versatile model has been designed in such a way that it can be adapted for class I or class II type approval. Thus, the bus provides an excellent link between the urban and suburban road networks.

With its compact dimensions, the vehicle will perform excellently on steep climbs and on tight mountain bends in Austria. These 9-meter buses will be equipped with a central electric motor. The propulsion system will be powered by energy derived from a set of Solaris High Energy batteries with a total capacity of about 280 kWh, and the interior will take at least 65 passengers.

Solaris has been present in Austria since 2003 and so far the bus maker has delivered more than 400 buses to 40 towns and cities there. Nearly 70 of them are zero-emission vehicles.