The researchers probed the upper bounds of heat release and temperature rise across several cell-level failure scenarios and battery configurations, including a direct comparison to Li-ion batteries.

For their analysis, the team used an Li7La3Zr2O12 solid electrolyte.

The study found that short-circuited all-solid-state batteries can reach temperatures significantly higher than conventional Li-ion, which could lead to fire through flammable packaging and/or nearby materials. 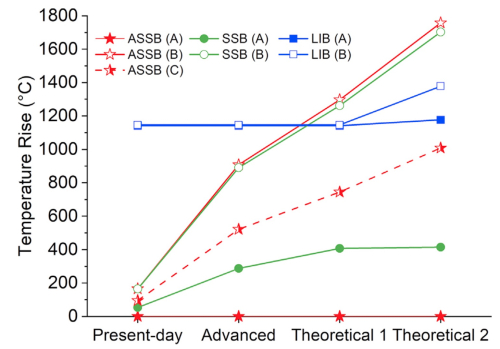 ASSBs are projected to experience higher temperature rises than LIBs in future high-energy-density configurations involving Li-metal anodes because the same amount of heat is generated over a smaller mass and volume. Short circuits are a common problem with ASSBs because Li dendrites can grow through the SE and reach the cathode. As SEs become thinner, driven by demands to increase energy density, the ability to prevent dendrite growth is typically reduced. Preventing Li-dendrite growth into SEs and ensuring reactive species do not cross SEs are critical safety problems to overcome before commercializing ASSBs.

The calculations provided above show expectations for potential temperature rise as ASSB and SSB concepts mature, although materials advances might lead to other paths. How-ever, the present work clearly shows that the evolution of energy density, SE thickness, and cell designs affect potential safety concerns. Therefore, we caution that safety testing on present-day and advanced formats may not be indicative of future SSB architectures as materials, components, and larger format cell development progresses.

There are nonflammable liquid electrolytes