The US Environmental Protection Agency (EPA) is proposing new, stronger standards to promote clean air and reduce pollution from heavy-duty vehicles and engines starting in model year (MY) 2027.

The proposed multi-pollutant rule would further reduce air pollution from heavy-duty engines and vehicles across the United States, including ozone and particulate matter (PM). In addition, as part of this rulemaking, EPA is proposing targeted updates to the existing Heavy-Duty Greenhouse Gas Emissions Phase 2 program (HD GHG Phase 2). This proposed rulemaking builds on and improves the existing emission control program for on-highway heavy-duty engines and vehicles. 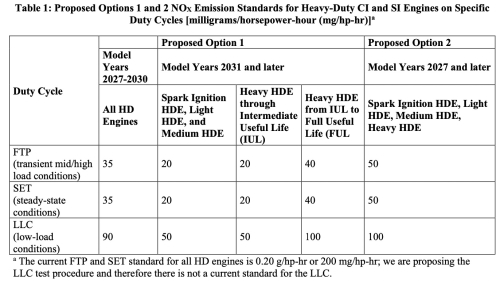 EPA estimates that if finalized as proposed:

Given the analysis we present in this proposal, we currently believe that Option 1 may be a more appropriate level of stringency as it would result in a greater level of achievable emission reduction for the model years proposed.

The proposed revisions to existing GHG standards for MY2027 and beyond would set updated GHG emissions standards for subsectors where electrification is advancing at a more rapid pace. These sectors include school buses, transit buses, commercial delivery trucks, and short-haul tractors.

In a separate action, EPA will be setting new GHG emissions standards for heavy-duty vehicles as soon as model year 2030. This action will more comprehensively address the long-term trend towards zero emissions vehicles across the heavy-duty sector.