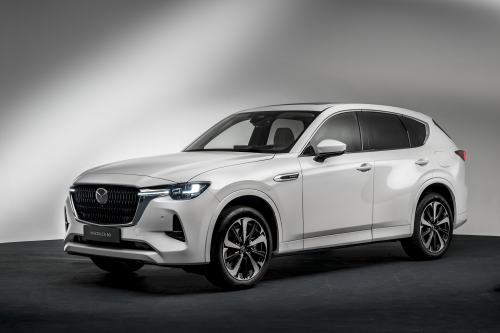 All three powerplants are mated to a new eight-speed automatic transmission and Mazda’s i-Activ All-Wheel Drive system. The e-Skyactiv D diesel unit and the e-Skyactiv X gasoline engine may also be equipped with rear-wheel drive only. Mazda Intelligent Drive Select (Mi-Drive) offers a choice of four drive modes (plus EV mode for the PHEV).

The six-cylinder engines were developed based on the ‘right-sizing’ concept, which calls for optimizing displacement to improve fuel and power efficiency. Combining eight-speed automatic transmission with the electrification of Mazda’s 48V mild hybrid system, M Hybrid Boost, all three units are designed to significantly improve power delivery and driving pleasure, while at the same time enhancing environmental performance.

This gasoline engine in the e-Skyactiv PHEV engine develops a maximum power output of 141 kW at 6000 rpm and 261 N·m of torque. The electric motor delivers 100 kW of power and 250 N·m of torque from zero rpm. With intake tuning to improve torque at the most frequently used mid- to low-speed ranges – 1,500 to 3,000 rpm, this combination of engine and motor delivers a total system output of 327 PS/241 kW and abundant torque of 500 N·m—making it the most powerful road car Mazda has ever produced.

The Mazda CX-60 e-Skyactiv PHEV offers 39 miles of combined electric motor-powered driving with the vehicle running at 62 mph or less and 42 miles of city EV range, while the performance of the combined drivetrain delivers a 0-62 mph performance of 5.8 seconds.

A first for the company, Mazda’s MHEV48 hybrid technology equips both of the Mazda CX-60’s straight-six powerplants. When paired with the diesel engine, it offers not only the value of even better fuel economy, but also improved environmental performance by using the electric motor to support the engine in the light load (idle to low speed) range where internal combustion engines are not very efficient.

It uses a brake-by-wire system to detect the required level of braking force whilst generating as much energy as possible within this range. It then compensates for any shortfall by braking force generated by the friction brakes, achieving both a natural braking feel and good fuel economy.

The compact and innovative brake-by-wire system unit integrates operation of the brakes, the brake booster and the brake control system. As the brakes are controlled by electrical signals, this set-up facilitates more intricate control of the brake compared to previous mechanical systems.

Additionally, the CX-60 also features Mazda’s Kinetic Posture Control technology which further stabilizes vehicle posture when cornering by undetectably braking the inside rear wheel to mitigate roll and the draw the car body downwards, while positioning the high-voltage battery between the front and rear axles and as low as possible, further helping the CX-60’s center of gravity and stability.

Mazda dealerships in Europe started accepting pre-orders for the model on 8 March and sales are due to begin in summer 2022.

Mazda plans to introduce four models from the Large Product group to the in-high-demand global SUV market by the end of 2023. Mazda will begin production of the CX-60 at Hofu Plant No. 2 in Yamaguchi prefecture on 11 March 2022. The Japanese specification CX-60 is due to be introduced in early April.

It's astonishing that such a small company can innovate so much. A diesel PHEV that does 39 miles in electric mode?! Sign me up. Although I'm really waiting for the introduction of their REX option, a tiny wankel range extender option on the MX-30. Hurry up on that, Mazda.