Keliber, a Finnish mining and battery chemical company that aims to start the sustainable production of battery-grade lithium hydroxide, has analyzed the CO2 emissions generated by its future production using two studies. Based on the work, Keliber’s lithium hydroxide will have a smaller carbon footprint than most of the competitors’ products. Keliber plans to begin production in 2024.

Keliber benefits from an integrated production process. The ore is extracted and processed at less than 70 kilometers from the lithium chemical plant, where the refining process is energy-efficient. More than half of the electricity from the Finnish national grid is generated from renewable energy sources. In addition, Keliber’s location near potential European customers positively effects on the emissions created in the production chain.

In the comparison, Keliber shows the lowest emission intensity of 4.38 tonnes of CO2/produced tonne of lithium hydroxide monohydrate (LiOH · H2O). The analysis has been performed according to the model by World Resources Institute, and it encompasses all CO2 emissions associated with the company’s own production at the mine site, refining facility, and transport between these facilities (Scope 1), as well as the emissions emanating from the production of purchased electricity (Scope 2). ​ 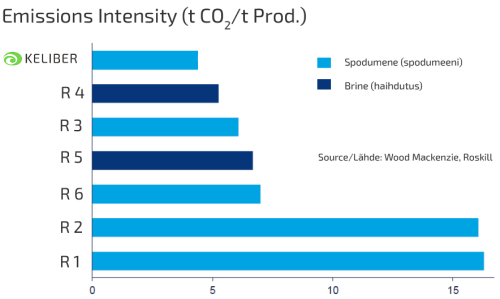 The two production routes that show the greatest emissions intensity represent well over half of the current global production of lithium carbonate and hydroxide. The production chains originate in Australia, where spodumene ore is extracted, processed and transported to China for refining. The CO2 emissions are more than 16 tonnes/produced tonne, due to the dominance of coal as the energy source.​

Production in Chile, based on naturally low-carbon brine, causes slightly more emissions than Keliber’s route: 5.25 tonnes/produced tonne. Three production routes have emissions within the limits of 6.08–6.98 tonnes of CO2: these include hardrock-based extraction and refining in Australia; and planned refining in Germany, using Argentinian brine or European spodumene as raw material.

Materials included in LCA.​ In a life cycle assessment (LCA), Keliber’s total carbon footprint is 10.0 t CO2-eq/produced tonne of LiOH · H2O. The LCA is a cradle-to-gate analysis that covers all production stages from the mine to a finished product leaving the lithium chemical plant. In addition to direct (Scope 1) and indirect (Scope 2) GHG emissions, the assessment includes Scope 3 emissions, for example process chemicals and waste management. The assessment has been prepared by Vahanen Environment Oy, a Finnish environmental consultant. 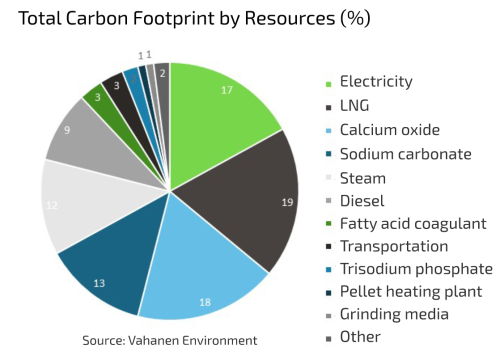 According to the assessment, 78% of Keliber's emissions are generated in the refining stage at the lithium chemical plant. The fuel used in the study, LNG, and the process chemical calcium oxide are the largest sources of emissions, accounting for 37% of Keliber’s total carbon footprint. Electricity accounts for 17% and diesel used in the mine for 9%.

We have ordered these studies to understand the size of our future carbon footprint, and how to reduce emissions. As expected, Keliber seems to be among the lithium chemical producers with lower-than-average emissions. However, the comparative research data is still very limited. We will continue the studies, to ensure that we can keep our carbon footprint as small as possible while making a product for reducing emissions from transportation and traffic.