The Vertical Flight Society (VFS), a non-profit organization working to advance vertical flight, is holding the first public event in the United States on the use of hydrogen and fuel cells for aviation applications. The event, the 1st H2-Aero Symposium & Workshop, is being held 29-31 March 2022, in Long Beach, California.

The event. The first day and a half of the Symposium will feature keynote presentations by executives from aircraft developers Airbus, Bartini, Piasecki Aircraft and ZeroAvia, as well as hydrogen companies Shell, Plug Power, Universal Hydrogen and ZEV Station.

Representatives from the US Department of Energy (DOE), Argonne National Laboratory, the Department of Defense (DOD) and NASA will also talk of the plans and progress in this area. International hydrogen aviation developers will also be speaking, including one of Europe’s key aircraft and space research organizations, DLR—The German Aerospace Center, and aircraft developer H2Fly.

Representatives from the California government and the California Fuel Cell Partnership (CaFCP) will be sharing their experience in zero-emission vehicles and infrastructure deployment opportunities. The president of the Massachusetts Hydrogen Coalition will also be speaking of the hydrogen & fuel cell developments in the Northeast.

The afternoon of Wednesday, March 30, will be a kickoff workshop to gain public input to finalize the scope of the Vertical Flight Society’s H2-Aero Team. The near-term goal of H2-Aero is to develop demonstration project(s) between hydrogen infrastructure and hydrogen aircraft, seeking to catalyze a public-private partnership (PPP) to accelerate the decarbonization of aviation. A further goal would be to leverage scale and develop a roadmap to H2-Hubs at airports.

On the morning of Thursday, 31 March, there will be tours of the Shell heavy-duty hydrogen refueling station at the Port of Long Beach which fuels zero-emission fuel cell electric trucks.

The background. In 2014, the Vertical Flight Society held the world’s first public meeting on electric vertical takeoff and landing (eVTOL) aircraft, and VFS has been leading eVTOL efforts ever since. With hydrogen fuel cell technology making rapid advances over the past decade, VFS sees a similar, pivotal moment in aviation for vertical and conventional flight aircraft.

Battery-electric and hybrid-electric energy systems are well known to be heavier and larger than comparable fossil-fuel based aircraft powerplants. But the capability for power-by-wire, distributed electric propulsion, zero tailpipe emissions and extremely low noise have engendered more than 600 eVTOL concepts from 350 designers worldwide, as cataloged in the World eVTOL Aircraft Directory. The directory is part of the VFS Electric VTOL News website. 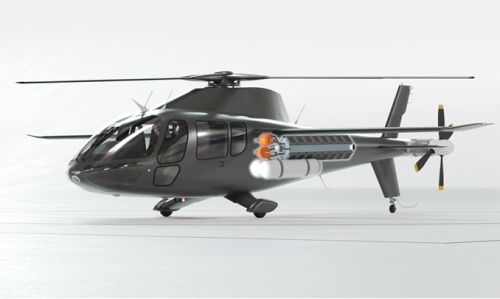 Hydrogen holds the promise for abundant, clean, sustainable energy, with water vapor as the only byproduct. However, there are many challenges for use in aircraft, including the cost, weight, volume and complexity, as well as generating the hydrogen and transporting it to the point of need, affordably and without burning carbon fuels to do so.

The European Union, the United Kingdom and China have all announced major government initiatives to support hydrogen for aviation. The Biden Administration has allocated $64 billion to expand the hydrogen infrastructure in the US, though targeted toward ground transportation. In the past year, several traditional aircraft manufacturers (including Airbus, Mitsubishi and De Havilland) have partnered with hydrogen fuel cell makers to support retrofit and certification of hydrogen-electric propulsion systems on existing airplanes as demonstrators for potential future products.

Although initially focused solely on eVTOL, in recent years, VFS has expanded its support to electric short takeoff and landing (eSTOL) and electric conventional takeoff and landing (eCTOL) aircraft. The past few years has seen a blurring of the lines between rotorcraft—certificated by the US Federal Aviation Administration (FAA) under Part 27 and Part 29 airworthiness regulations—and other “small airplanes” that are certificated under Part 23. Nearly all of the eVTOL aircraft developers are targeting FAA certification as a Part 23 “small airplane” and nearly all of the supporting technologies are highly common, whether developed for eVTOL, eSTOL and eCTOL. This is also true for hydrogen fuel cells powerplants for smaller Part 23 aircraft.

When VFS launched the first eVTOL meeting in 2014, the idea of VTOL aircraft was greeted with widespread skepticism, but growing technical progress, flight demonstrations, government validation and private investment have helped reverse public perception. It is now recognized that the vertical flight market is poised for significant expansion over the next few years as eVTOL aircraft enter service that can have higher performance than conventional helicopters for certain missions, as well as lower operating costs and lower noise.

Similarly, the Vertical Flight Society has supported eSTOL and eCTOL aircraft developments over the years in a collaborative environment. VFS helped run the CAFE Foundation’s Electric Aircraft Symposium (EAS) for the past several years and has now taken over full responsibility for the event. VFS will hold this year’s 16th Annual EAS as a hybrid meeting on 23–24 July 2022, in conjunction with AirVenture in Oshkosh, Wisconsin.

VFS was founded as the American Helicopter Society in 1943 by the visionaries of the early helicopter industry, who believed that technological cooperation and collaboration were essential to support this new type of aircraft. Today, VFS is playing a similar role helping to advance today’s revolutionary electric flight aircraft.

For weight and range this is one way