Europe has become the fastest growing region for new electric vehicle (EV) lithium-ion battery capacity outside of China, according to Benchmark Minerals. Just three and a half years ago, Benchmark’s lithium-ion Battery Gigafactory Assessment (September 2018) reported Europe’s battery cell capacity to be at 120GWh by 2030—enough cells for 2.2 million EVs.

Now this planned annual capacity figure stands at 789.2 GWh in 2030—more than a 6-fold increase and enough to produce almost 15 million pure EVs. However, Benchmark notes, the question remains how much of this capacity will actually come onstream and in what quality? (Benchmark will explore this topic at its upcoming Battery Megafactories Europe 2022, 22-23 March, Berlin, Germany.)

By end-2022, Europe is set to have 7 active lithium-ion battery producers of which the top five by capacity (and gigafactory location) are:

In terms of quality, Europe has four of the world’s seven tier one lithium-ion battery makers; once Northvolt’s gigafactory in Sweden is active, Benchmark anticipates this will also become a tier one producer.

By 2030, this top five landscape will be reshaped as Benchmark’s Gigafactory Assessment (February 2022) shows Europe to be on track for 27 gigafactories from 18 battery cell producers.

A more recent trend with Europe’s lithium-ion battery build out is the emergence of auto majors as pseudo-battery producers seeking to secure cell supply through joint-venture plants. In 2030, of the 17 gigafactories with a minimum annual capacity of 1 GWh in Europe, 8 of these plants are through automotive partnerships such as VW Group, Stellantis, Nissan, Volvo and Renault.

Of most significance is Tesla’s Berlin Gigafactory which is expected to officially commission commercial cell production in 2023 but reach a capacity of 75 GWh by 2026 and be operating at 125 GWh by 2030. Giga-Berlin is on course to be Europe’s largest gigafactory by some way and the world’s second-largest lithium-ion battery plant behind its counterpart in Austin,Texas.

An expanded Northvolt is forecasted to be the region’s second second-largest producer with 92 GWh of capacity through plans in Skellefteå, Sweden and a new joint-operation with Volvo, in Gothenburg, Sweden. CATL, Erfurt will be the third-largest battery producer in Europe with 80 GWh by 2030.

LG Energy Solutions is expected to be fourth with 67 GWh from Poland with no new gigafactory locations yet announced from the traditionally more conservative South Korean producer.

Meanwhile, ACC (Total/Stellantis) is expected to be operating three plants in France, Germany and Italy with a combined capacity of 64 GWh by 2030 with Verkor’s new Dunkirk-based Gigafactory to be at 50 GWh as the sixth largest producer. 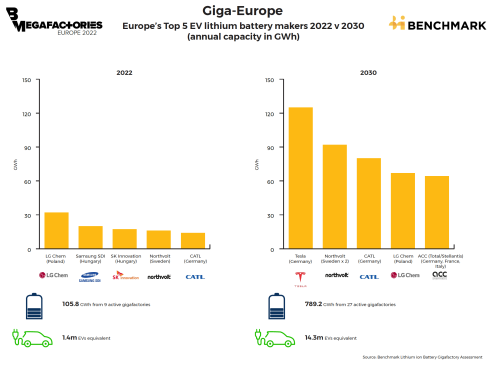 By 2030, Benchmark anticipates Europe’s top five battery makers by capacity to be:

This is a more than 6-fold increase on what is expected for 2022. For comparison, China is growing by 220% in the same period, while the US is forecast to grow its battery capacity by 575%.

Benchmark cautions that capacity does not necessarily equal reliable supply for the EV industry. There are a number of bottlenecks in building and operating these super-sized battery plants that can take five-years to build and fully ramp up.

What - yet another article that fails to mention the rise and rise of price-busting LFP / LiFePO batteries - which also crucially contain no cobalt and no nickel!? Note that Tesla's LFP-powered Model 3 still has an impressive EPA range of 272 miles. BYD's and other LFP cells are helping drive down EV prices in China but strangely elsewhere average EV prices continue to rise($56,000 is average price in US !).
The BYD Dolphin is just one of many great low-cost LFP-powered EVs sadly or scandalously still only available in China($14,000-$15,500). - watch video test-drive:
https://youtu.be/63wCfqSQp8c
Video title: "Has BYD Beaten Tesla to a Truly Affordable EV?"
The answer of course is "Yes" - because it's abundantly clear that no carmakers or EV-related vested interests outside China including Tesla want a genuine price-busting EV Revolution - even if the LFP batteries largely driving that revolution contain no cobalt and no nickel.
Paul G(Editor: EVUK...since 1999)

@EVUK:
Seems to me that LFP batteries are the best decision currently if you want a daily driver and fast charging is not a concern.
@Et al:
EV sales have been slow because no one can, or will, match price parity with ICEVs. But, the high gasoline and maintenance costs of obsolete gassers is pushing some people into buying EVs anyway, no matter the higher prices.

the speed of supercharging from ~40% to 99% was significantly faster for the LFP variant
https://cleantechnica.com/2020/11/01/tesla-model-3-with-new-lfp-battery-now-supercharges-even-faster/

@ SJC: I'm convinced that the major obstacle is not the charging rate, more so the inhibitive high price.

In China, the price of LFP cathode active material (CAM) from CATL is 43% less expensive, (per kWh), than their NMC811 material.
https://nickelinstitute.org/blog/2020/june/battle-of-the-batteries-cost-versus-performance/

This post is about European Battery production capacity, so nothing about China, Japan, Korea, or USA is included. Currently, most of the Tesla M3 sold in Europe are using CATL batteries made in China.
Some interesting facts: last year Tesla ordered 45GWh of batteries from CATL, they are also getting batteries from Panasonic (est. 40 GWH), LG, and others.
Battery cost is another metric. A Ford Mustang Mach E battery (roughly 90 kWh costs $20k - https://www.carscoops.com/2021/12/the-ford-mustang-mach-es-battery-pack-can-cost-more-than-a-new-maverick/), A 2020 Tesla Model 3 battery costs $13.5k + labor to replace (https://www.thedrive.com/tech/38915/it-costs-nearly-16000-to-replace-a-tesla-model-3-battery-pack).
The costs of the CATL LFP battery looks like $88/kWh at the pack level or $5288 for a Tesla M3 SR+ 60kWh battery. So Tesla must be making a lot of profit on these LFP battery packs.
The BYD Dolphin ($16,495 after subsidies) has a 44.9 kWh battery, so battery cost is just under $4k. So why can’t Tesla make a $25k EV?

@EVUK:
The BYD EA-1 Dolphin is exactly the same size as the Chevy Bolt and would be perfect for Europe.
However, the perfect global car is the 2023 Toyota BZ Corolla also made with the BYD e-platform 3.0 (https://www.whichcar.com.au/news/electric-2023-toyota-bz-corolla-spied). Unfortunately, exclusive to China.