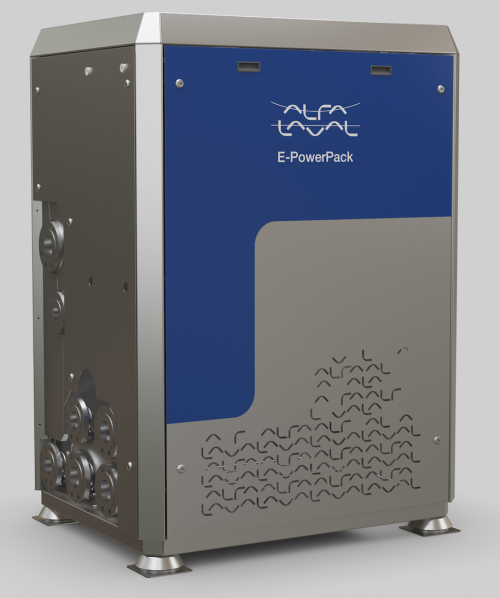 The basic principle of an ORC system can be thought of as the opposite of a heat pump. Where heat pumps use electrical power to create thermal energy for various purposes, an ORC system uses heat energy to generate electricity. In a typical ORC design, a thermal energy source feeds an evaporator to drive an expander or “reverse compressor”, which in turn generates the electricity. 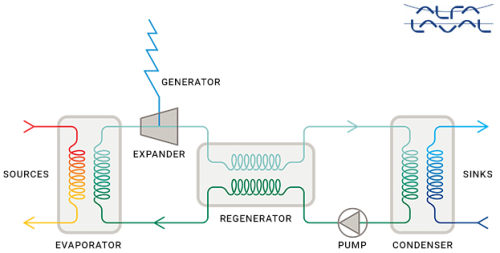 Heat exchangers are a critical element in the ORC system and are used in several stages of the cycle. They function as evaporators, condensers, and regenerators or economizers. Using the most optimal plate heat exchanger technology for the duty ensures the system can provide the most reliable, efficient, and therefore sustainable, electricity generation.

Alfa Laval is pursuing a wide range of technologies to support decarbonization, both independently and with partners. Fuel cells and many other innovations are in the pipeline, but the first critical step is to leverage the existing energy on board. The E‑PowerPack does that in a revolutionary way, while building on Alfa Laval’s many decades of waste heat recovery experience.

Launching in April, the E-PowerPack is a self-contained solution that can generate electricity from many different heat sources on board. These include exhaust gas waste heat, which accounts for 50% of the energy from combusted fuel, but also liquid sources at lower temperatures, such as engine jacket water. All can make a sizeable difference.

Regardless which fuels they operate with today, fleets can use the E-PowerPack to reduce their fuel consumption, emissions and costs. On vessels where moving to low-sulfur fuel has created a surplus of steam, the E-PowerPack will transform the excess into a free source of power. Going forward, the E-PowerPack will also be vital as energy recovery becomes key in transitioning to green methanol and ammonia.

Savings that offset fuel costs are only one part of the picture, since methanol and ammonia are both more expensive and less energy-rich. For the amount of fuel they carry to be feasible, vessels will need to utilize all of the energy that methanol and ammonia contain. The E-PowerPack will be a vital part of achieving the energy balance.

—Danny Ingemann, Head of Global Sales responsible for the product

Organic Rankine Cycle has been used in geothermal
https://www.ormat.com/en/renewables/geothermal/view/?ContentID=8819