The main goal of ERMA, which is co-funded by the European Union, is securing critical raw materials for the European market.

The Puławy project will aid the creation of a secure supply chain option for neodymium, praseodymium, dysprosium, and terbium for the European Union. All these rare earth elements are critical in the production of electric vehicles, wind turbines and other clean energy applications that are key to Europe’s Green Agenda. 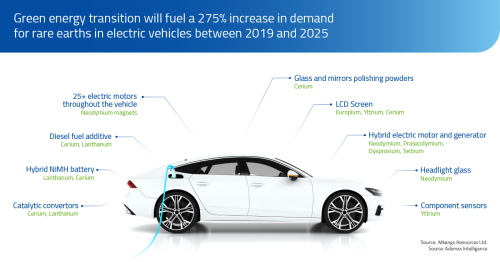 This is a multi-national project where we have a Canadian partner, Mkango Resources, accessing critical raw materials in Malawi, Africa, processing them in a plant in Poland, all for the benefit of the European economy. The Puławy project is one of the first ERMA projects to get the greenlight to provide critical raw materials needed to fulfill European goals in the green transition while diversifying the supply chain in the long term.

Neodymium and praseodymium are key components of permanent magnets used in electric vehicles, wind turbines and many electronic devices and prices for Nd / Pr oxides have risen by 85% and 135% respectively over the last 12 months.

The Puławy plant is expected initially to produce approximately 2,000 tonnes per year of neodymium, praseodymium and / or didymium (NdPr) oxides as well as a heavy rare earth enriched carbonate, containing approximately 50 tonnes per year dysprosium and terbium oxides. It is also expected to produce lanthanum cerium carbonate. Mkango is evaluating marketing and processing options for the heavy rare earth enriched carbonate and lanthanum cerium carbonate.

This cooperation and support with securing financing is one of the first projects resulting from ERMA’s strategic initiatives securing rare earth elements for European industry. A first action plan entitled “Rare Earth Magnets and Motors: A European Call for Action” was issued in September 2021. This report outlines current and projected European demand for Rare Earth Elements and steps which should be taken to secure their supply. The Puławy project is addressing several critical issues highlighted in the report.