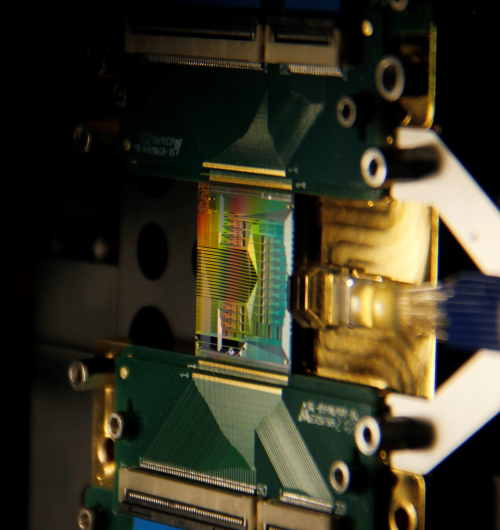 Frequency Modulated Continuous Wave (FMCW) LiDAR is the key enabler for long range (>300m) measurements and enables direct velocity measurement in every pixel, which is not possible for ToF (Time of flight) systems, Scantinel says.

In a whitepaper, Scantinel explains:

ToF LiDAR systems measure the time elapsed between an emitted short pulse of incoherent light and its reflection on the target. FMCW LiDAR, on the other hand, is based on a coherent measurement principle. A coherent superposition of the return light and of its local coherent copy, results in the signal that is then processed in the detection path. This process makes the system immune against interference from sunlight and other sources that are not coherent with the emitted light. The so-called coherent amplification effect in the detection path “amplifies” the return signal from the target, which is by nature very weak and consists only of a low number of photons. The coherent amplification effect significantly reduces the impact of the noise floor from other components in the system, such as the detectors. FMCW provides a so-called shot noise limited system, characterized by the best possible Signal-to-Noise Ratio (SNR) achievable by any physical system. This property of FMCW systems is the key enabler for long range (>300m) measurements required by autonomous vehicles. In addition to these properties, FMCW enables direct velocity measurement in every pixel, which is not possible for ToF systems. Velocity measurement is a very important feature enabling significantly improved object detection in the final application of autonomous vehicles.

Most automotive LiDAR systems are currently based on the Time of Flight (ToF) principle, at wavelengths of 905nm or 1550nm. The big advantage of ToF systems at 905nm is the compatibility of the wavelength with CMOS silicon-based detectors, which are available at relatively low cost. However, 905nm systems cannot emit enough optical power for long range measurements due to human eye safety regulations. Consequently, experts expect 905 nm ToF to be ruled out as technology of choice for long range LiDAR due to very fundamental physiological reasons.

Scantinel has developed novel solid-state beam steering technology: Optical Enhanced Array (OEA). This combines a photonic integrated chip and an advanced optical system. A photonic integrated chip integrates a set of optical structures on silicon and processes light, in a similar way to what electronic chips do with electrical signals. The PIC, designed by Scantinel and manufactured by IMEC, enables the parallelization of multiple FMCW channels in a solid-state fast scan axis.

The first LiDAR demonstrator based on 5D+ full solid state will be available by mid of this year. The ultimate goal in the automotive sector is autonomous driving. Our FMCW LiDAR technology brings us closer to that goal.

Founded in 2019 and based in Ulm, Germany, Scantinel Photonics GmbH is backed by ZEISS Ventures and Scania Growth Capital.

I'm looking forward to autonomous vision only systems proving themselves and soon supplemented with V2X which is essentially a super power sensor.