As part of its 2022 Annual Media Conference, Audi is presenting the next model in its future electrically powered A6 Luxury Class: the Avant. Audi introduced the Audi A6 Sportback with an electric drive system almost a year ago at the Shanghai Auto Show in April 2021 (earlier post). The production-oriented A6 Avant e-tron concept car now illustrates the synthesis of pioneering drive technology and Audi’s traditional design world: the Avant (i.e., the wagon format). 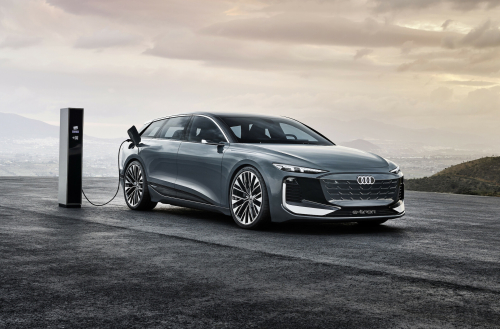 Like the Audi A6 e-tron concept that was exhibited in 2021, the A6 Avant also has an exclusively electric drive system based on the Premium Platform Electric (PPE) platform, developed under Audi’s leadership. At the same time, it represents a new design concept with the same dimensions as the A6 Sportback e-tron. At 4.96 meters (16.3 ft.) long, 1.96 meters (6.4 ft.) wide, and 1.44 meters (4.7 ft.) high, its body puts it in the luxury class. Its lines are a consistent development in Audi’s contemporary formal language. Significant elements like the closed Singleframe and the continuous strip of lights in the rear emphasize its kinship with the other electrically powered Audis in the e-tron fleet.

The PPE is designed exclusively for battery-electric drive systems and can therefore take full advantage of all the benefits of this technology. The key element of the future PPE fleet is a battery module between the axles that holds around 100 kWh of energy in the Avant version of the A6 e-tron concept.

Using the entire vehicle base makes it possible to achieve a relatively flat layout for the battery. This means that it will be possible to use this single platform both for vehicles with high body styles and vehicles with a decidedly dynamic, flat architecture—such as the Audi A6 Avant—without any changes to the basic architecture.

The battery size and wheelbase of PPE vehicles are scalable, making them suitable for use in different market segments. However, the proportions of a fairly long wheelbase and very short overhangs are something they will all have in common. Occupants of the future PPE models will benefit from the long wheelbase, which translates into a longer interior and more legroom in both rows of seats—a key benefit across all segments.

The future range of PPE models will include versions with one electric motor each mounted to the front and rear axles that use electronic coordination to deliver all-wheel drive on demand and achieve a balance between driving dynamics and energy efficiency. In addition, the e-tron family will also include basic versions optimized for minimum consumption and maximum range—in this case, propulsion will come from a single electric motor mounted to the rear axle.

The Audi A6 Avant e-tron concept’s two electric motors are capable of delivering 350 kW of total output and 800 N·m of torque.

The front wheels of the Audi A6 e-tron concept are connected via a five-link axle specially optimized for electric vehicles with a multi-link axle in the rear. The concept car features Audi air suspension with adaptive dampers.

The heart of the Audi A6 Avant e-tron concept’s drive technology—and that of all future PPE models—will be the 800-volt charging technology. Like the Audi e-tron GT quattro before it, this ensures that the battery can be charged with up to 270 kW in a very short time at fast-charging stations. This technology will enter the high-volume mid-range and luxury segments with the PPE for the first time.

Thus, the A6 Avant will become the storage champ in a double sense—not only because of its spacious back end. The PPE technology enables charging times that come close to a conventional stop to refuel a car powered by a combustion engine. Just 10 minutes is enough time to charge the battery to a level sufficient to power the car for more than 300 kilometers (186 miles). In less than 25 minutes, you can charge the Audi A6 Avant e-tron concept’s 100 kWh battery from 5 to 80%.

Together with a range of up to 700 kilometers (435 miles)—depending on the selected drive system and power output—the models in the Audi A6 e-tron family are suitable for long trips. Furthermore, their range and charging speed keep pace with those of combustion engines, making them universal cars for everyday needs, from short trips to the store to longer road trips when going on vacation.

With its high torque right from the first revolution, even entry-level models designed for efficiency will accelerate to 100 km/h (62 mph) in less than seven seconds. And in the top-of-the-line, high-performance models, this sprint can even be reduced to well under four seconds.

PPE – versatile, variable, electric. 2018 saw the debut of the Audi’s first fully electric production vehicle – the Audi e-tron. Since then the brand has systematically and rapidly pushed ahead with the widespread introduction of electric mobility across its entire product range. Following the Audi e-tron SUV and e-tron Sportback, the highly dynamic e-tron GT quattro—based on a new technology platform developed jointly with Porsche AG—made its debut in February 2021. Two months later, the Audi Q4 e-tron and Q4 Sportback e-tron premiered—two SUVs in the compact segment with a common technological platform, the Volkswagen Group’s MEB.

The Audi A6 e-tron Sportback and Avant concept cars are now the first members of a family of vehicles—initially in the C-segment and later also in the B- and D-segments—to be based on the PPE. This modular system is being developed under Audi’s leadership together with Porsche AG. The first Audi production vehicles built on the PPE platform will be successively unveiled starting in 2023.

The PPE is the first platform designed to accommodate a range of high-volume automobiles—including SUVs and CUVs with high ground clearance as well as cars with low ride height—that are part of Audi’s core product range, such as the Audi A6 series. But there are also plans to expand the PPE range into the B-segment, which has been the highest-volume market segment for Audi for decades.

With the PPE, electric vehicles will now also be attractive to customers who prefer automobile concepts beyond the SUV segment—like an Avant, for example, which is characteristic of the brand.

As a result, Audi can effectively expand the range of electric vehicles in its portfolio via the high-volume B- and C-segments.