Home About Contact RSS GCC Twitter Newsletter
GM buying Softbank’s stake in Cruise for $2.1B, putting in additional $1.35B
Suzuki to invest $1.3B for EV and EV battery manufacturing in India

In the face of the emerging global energy crisis triggered by Russia’s invasion of Ukraine and the countervailing barrage of economic sanctions, the International Energy Agency (IEA) is proposing a 10-Point Plan to Cut Oil Use. IEA claims that its plan would lower oil demand by 2.7 million barrels a day within four months—equivalent to the oil demand of all the cars in China.

This would significantly reduce potential strains at a time when a large amount of Russian supplies may no longer reach the market and the peak demand season of July and August is approaching. The measures would have an even greater effect if adopted in part or in full in emerging economies as well.

The new report also includes recommendations for decisions to be taken now by governments and citizens to transition from the short-term emergency actions included in the 10-Point Plan to sustained measures that would put countries’ oil demand into a structural decline consistent with a pathway towards net zero emissions by 2050.

Advanced economies account for almost half of global oil demand. Many of them, including the largest energy consumers, are required as members of the IEA to have oil demand restraint plans ready as part of their emergency response measures. 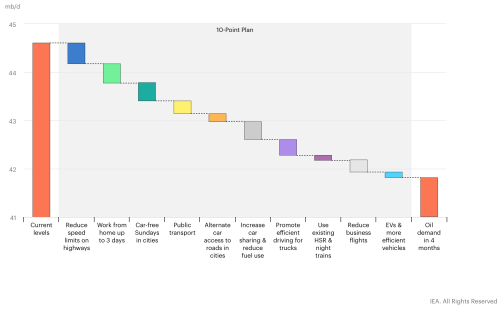 The IEA makes real eco dictatorship for citizens in democracies!
• My sensible suggestions that are immediately possible:
• End of pointless trade in goods with China by 50% - 100% immediately!
• Reducing the speed of trucks from 80km/h to 60km/h on motorways with the
requirement of up to 100% rail transport!
• Immediate ban on all "coaches" and thus passengers 100% train!
• Ban on all driving of tractors on roads!
• Ban on all flights of politicians and business people worldwide!

Carpooling should have started in the seventies

People still carpool in order to use HOV lanes.  Maybe the fix is more HOV lanes.