Home About Contact RSS GCC Twitter Newsletter
Suzuki to invest $1.3B for EV and EV battery manufacturing in India
All-electric BMW iX and i4 first BMWs with 5G support

Toyota Motor is entering three differently fueled vehicles in the ENEOS Super Taikyu Series 2022 Powered by Hankook Round 1 Suzuka 5-Hour Endurance Race (Suzuka 5-Hour Race), which takes place from 19 to 20 March 2022: a hydrogen engine-equipped Corolla, a new GR86-based vehicle that uses a biomass-derived carbon-neutral fuel (CNF), and a vehicle based on the GR86 from Round 2 running on gasoline. (Earlier post.)

Hydrogen engine. The hydrogen engine-equipped Corolla competed in a total of four rounds in last year’s Super Taikyu Series. In the approximate six months between the first round in May of last year and the final round in November, engine performance was improved to levels comparable to gasoline engines, with a 24% increase in power output and 33% increase in torque, along with successful control over abnormal combustion. However, improved cruising range and reduced hydrogen filling time for practical use are major issues that will be addressed throughout the year. 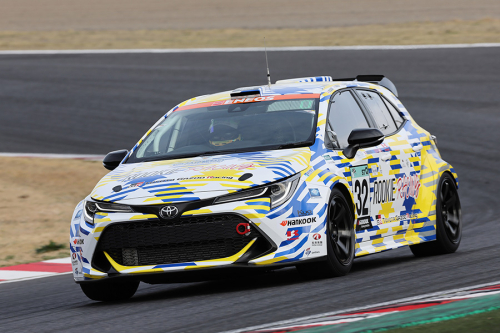 Toyota can control abnormal combustion by precisely controlling fuel injection and using hydrogen in the tank more efficiently. As a result, the possible driving distance on a single hydrogen fill-up has been improved by 20% since the last race.

In addition, seeking to improve cruising range even further, Toyota has started to take on the challenge of developing a new technology that can convert currently used gaseous hydrogen into liquid hydrogen. If this is eventually achieved, the improved energy density per volume will not only make it possible to greatly extend cruising distance, but also expand the options for the state of hydrogen that can be used.

Last year, Toyota made improvements to the vehicle to allow for filling from both sides, and reduced hydrogen filling times with each round. This year, with an eye on expanding the use of hydrogen in the future, Toyota is taking on the challenge of “high-flow filling”—i.e., increasing boosting the rate of pressure during filling.

Normally, the temperature inside the tank increases rapidly if filled all at once, but Toyota has changed the filling port and piping to handle large flow rates while ensuring safety to make sure the upper temperature limit isn't reached. By using high flow filling while maintaining the method of filling on both sides of the hydrogen engine-equipped Corolla, hydrogen filling time has been shortened from just under two minutes in the previous race to one and a half minutes.

Carbon-neutral fuel. Toyota is entering a new GR86-based vehicle that uses carbon-neutral fuel as an attempt to expand internal combustion engine fuel options. The vehicle will be powered by a 1.4-liter turbo engine developed from the GR Yaris engine and the hydrogen engine-equipped Corolla, and development will be promoted using technology on hand. 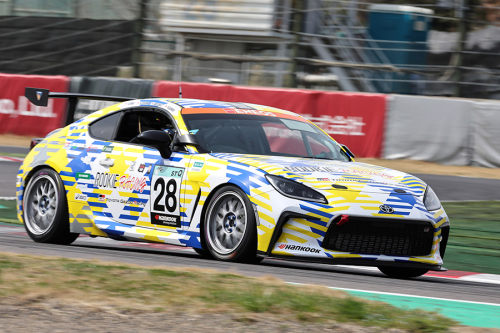 Carbon-neutral fuel has been attracting attention as a means of achieving carbon neutrality. Although carbon dioxide is emitted during combustion, the fuel itself is synthesized using CO2 from the atmosphere which results in plus/minus zero emissions, as well as the fact that it can use existing infrastructure and vehicle technology.

Toyota said that by competing throughout this year with Subaru Corporation, another ST-Q class competitor, and by training in the field of motorsports, it will discover issues, make improvements, and explore the possibility of future practical applications for CNF-fueled engines. In addition, the knowledge gained through refining the vehicle during races will be applied to the evolution of the Subaru BRZ and GR86.

In the ST-Q class, in addition to the hydrogen engine-equipped Corolla and GR86 (carbon-neutral fuel), Mazda Motor Corporation's MAZDA SPIRIT RACING Bio concept DEMIO and Subaru’s Team SDA Engineering BRZ CNF Concept will also participate in the rounds using carbon-neutral fuel. The three companies will exchange information in areas of cooperation while still competing against each other during the race, increasing technological research speed and striving to achieve a carbon-neutral society.

Production and transportation. In addition to solar power-derived hydrogen from Namie Town in Fukushima Prefecture, the hydrogen engine-powered Corolla will use a supply of hydrogen derived from solar power generation produced in cooperation between Yamanashi Prefecture, Tokyo Electric Power Company Holdings, Inc., and Toray Industries, Inc. 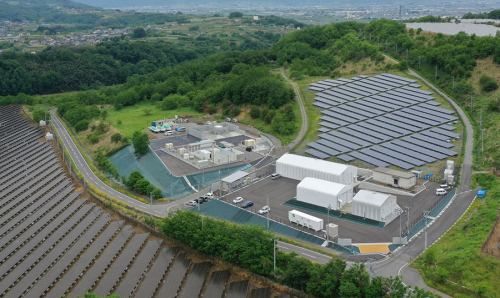 Hydrogen for the hydrogen engine-equipped Corolla will be transported to the Suzuka Circuit in the bio-fuel trailers of Toyota Transportation Co., Ltd, and the electric fuel cell trucks of Commercial Japan Partnership Technologies.

Until now, Toyota has used metal tank in hydrogen transportation, but going forward, CJPT's fuel cell electric trucks will use racks tanks mounted with lightweight resin liners cultivated in the development of the FCEV MIRAI, enabling high pressure hydrogen transport. (Earlier post.) By changing current tank to those with resin liners, tank pressure can be increased from 20 MPa to 45 MPa, and the amount of hydrogen that can be transported has increased by approximately four times compared to the previous race.