In a new study published in Physical Review Letters, researchers from Korea’s Institute for Basic Science (IBS) suggest that quantum charging of EV batteries will cut the charging time from ten hours to three minutes at home. 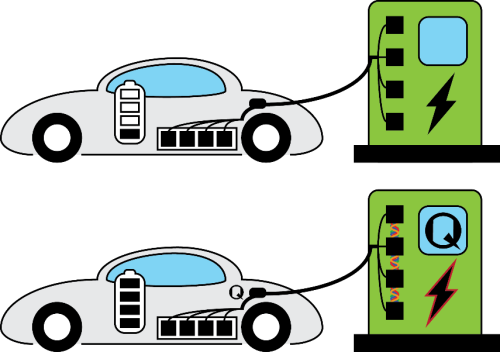 A pictorial illustration of today’s electric vehicle versus the future vehicle based on quantum battery technologies. Employing quantum charging would lead to a 200 times speedup in a typical EV, which means that the charging time would be cut from 10 hours to about 3 minutes (at home), or 30 minutes to 9 seconds at a charging station.

Despite significant and ongoing improvements in battery technology, consumers of electric vehicles still face slow battery charging speed. Currently, cars can take about 10 hours to recharge fully at home. Even the DC fast chargers require up to 20-40 minutes to fully recharge the vehicles. This creates additional costs and inconvenience to the customers.

To address this problem, some scientists have been looking to quantum physics. Their search has led to the discovery that quantum technologies may promise new mechanisms to charge batteries at a faster rate. The concept of a “quantum battery” was first proposed in a seminal paper published by Alicki and Fannes in 2012. It was theorized that quantum resources, such as entanglement, can be used to speed up the battery charging process by charging all cells within the battery simultaneously in a collective manner.

This is particularly exciting as modern large-capacity batteries can contain numerous cells. Such collective charging is not possible in classical batteries, where the cells are charged in parallel independently of one another. The advantage of this collective versus parallel charging can be measured by the ratio called the ‘quantum charging advantage’.

Around 2017, it was noticed that there can be two possible sources behind this quantum advantage— ‘global operation’ (in which all the cells talk to all others simultaneously, i.e., “all sitting at one table”) and ‘all-to-all coupling’ (every cell can talk with every other, but a single cell, i.e., “many discussions, but every discussion has only two participants”). However, it is unclear whether both these sources are necessary and whether there are any limits to the charging speed that can be achieved.

Recently, scientists from the Center for Theoretical Physics of Complex Systems within the Institute for Basic Science (IBS) further explored these questions. The paper showed that all-to-all coupling is irrelevant in quantum batteries and that the presence of global operations is the only ingredient in the quantum advantage. The group went further to pinpoint the exact source of this advantage while ruling out any other possibilities and even provided an explicit way of designing such batteries.

In addition, the group was able to quantify how much charging speed can be achieved in this scheme. While the maximum charging speed increases linearly with the number of cells in classical batteries, the study showed that quantum batteries employing global operation can achieve quadratic scaling in charging speed. To illustrate this, consider a typical electric vehicle with a battery that contains about 200 cells. Employing this quantum charging would lead to a 200 times speedup over classical batteries, which means that at home charging time would be cut from 10 hours to about 3 minutes. At high-speed charging stations, the charge time would be cut from 30 minutes to mere seconds.

Researchers say that consequences can be far-reaching and that the implications of quantum charging can go well beyond electric cars and consumer electronics. For example, it may find key uses in future fusion power plants, which require large amounts of energy to be charged and discharged in an instant.

Of course, quantum technologies are still in their infancy and there is a long way to go before these methods can be implemented in practice. Research findings such as these, however, create a promising direction and can incentivize the funding agencies and businesses to further invest in these technologies. If employed, it is believed that quantum batteries would completely revolutionize the way we use energy and take us a step closer to a sustainable future.

A bit early for the 1st April, IMO.
If you charge at 200x the speed, it means 200x the power.
If you have any heat loses, surely they would also scale up 200x.
Might get very hot very fast.
+ where would you get that level of power ?
Would you charge a local battery at say 8 kW and use that to charge the EV battery at 600 kW?
Easy for physicists (and SF authors), harder for engineers.

It's interesting that the de facto standard is to carry the charger in the EV and to charge thru an EVSE using AC off the utility lines.
Why not offload the charger and install a DC fast charger at home...it won't charge in 3 minutes; but, would save the weight and space of the charger in the car and give you the flexibility to charge at whatever the batteries will take using the 240V/200amp utility service.
Remember this is just a spot of time in the growth of battery technology; Many expect much greater capability as development progresses. Batteries and their associated electronics will follow the expected growth patterns of becoming smaller, lighter, more energy dense, and more powerful.

Why not offload the charger and install a DC fast charger at home...

Because charging at home is not when time is critical.  If you had ever driven an EV, you would know this in your gut.