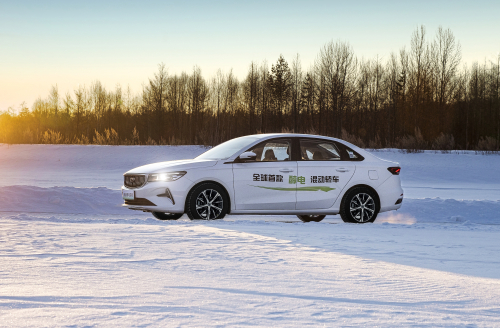 The engine and powerful e-motor are connected to a 3-speed Dedicated Hybrid Transmission (DHT) which provides increased efficiency at low speeds by propelling the vehicle with pure electric power, ensures smooth cruising by utilizing the engine as a range-extender with e-motor powering the wheels, and provides bursts of power for high-speed overtakes with a transmission gear ratio that provides up to 4920 N·m of output torque.

Acting as a range extender at lower speeds and only sending power to the wheels at high speeds allows the 1.8L methanol engine to operate at peak efficiency and lower emissions. From 0-100km/s takes 8.8 seconds and traveling 100km consumes roughly 9L (WLTP) of clean methanol.

Clean methanol from green and renewable sources is the most realistic and effective path to reducing emissions and achieving carbon neutrality. The advantages of methanol fuel are not theoretical and have been proven for decades in applications around the world. Methanol fuel choices offer the world a road to a greener and more sustainable future.

Geely Holding Group is the largest developer and producer of methanol vehicles in the world. The Group’s subsidiary brands have produced the Geely Auto Emgrand methanol sedan while Geely Commercial Vehicles have produced the Farizon M100 heavy truck, which have both passed “China VI” emissions standards.

From well to wheel, Geely’s methanol vehicles allow for a 70% reduction in CO2 emissions compared to gasoline models. Previous demonstration trials of non-hybrid Geely Emgrand methanol sedans in Iceland achieved an average well to wheel emissions of 46g of CO2 per km, even lower than electric vehicles in most countries. In the future, Geely Holding methanol vehicles will undergo EU certification and be promoted to other European markets in support of accelerating the goal of reaching carbon neutrality.

In 2016, Geely Holding invested in Carbon Recycling International (CRI) which utilizes renewable energy and carbon capture to synthesize green e-methanol (Vulcanol) on an industrial scale. Geely Holding has also helped CRI introduce its technology to the Chinese market with the world’s largest production facility of e-fuel from CO2.

The Shunli plant in Anyang, Henan will produce 110,000 tons of clean methanol fuel along with other chemicals while recycling 160,000 tons of captured CO2.

difficulties with cold starts
Warm the fuel before the injectors

Be suspicious of any organization that uses the color green to describe a fossil fuel, especially green methanol(CH3OH); when burned in internal combustion engines, as here, they all produce CO2, NOx and other pollution.
Wonder why they never use the color red to "red wash?" They use blue and green a lot, but never red, Um! Maybe that because it's reserved for the party's color. Who knows?