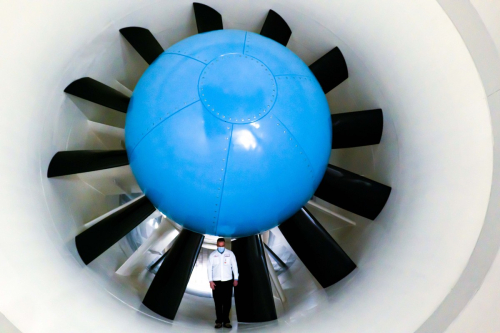 HALO Wind Tunnel Main Fan. The main fan is a total of 8 meters in diameter with 12 hollow carbon fiber fixed-pitch blades and driven by a five-megawatt, 6700 horsepower electric motor.

Honda created the multifunctional HALO facility to reinforce its commitment to developing fuel-efficient and fun-to-drive vehicles. One of the most advanced of its kind anywhere, the wind tunnel uses a unique interchangeable modular ground plane system capable of aerodynamic vehicle testing of production vehicles and race machines.

With a five-belt rolling road system designed for production vehicle development and a second single wide-belt system for testing both high-performance sports cars and purpose-built race vehicles, the tunnel can generate wind speeds of more than 190 miles per hour. 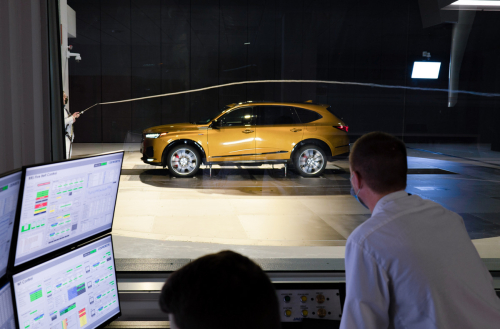 5-Belt Aerodynamics Testing. The 5-belt module consists of belts under each wheel and one belt running underneath the vehicle; it’s used to test the aerodynamic performance of passenger vehicles and light trucks.

The wind tunnel can also quickly enable a sophisticated acoustic test system for an aeroacoustic testing mode that utilizes a system of acoustic arrays, made up of microphones and cameras, able to collect real-time data and precision measurement. This becomes even more important as an element of vehicle design as Honda moves toward its electrified future. 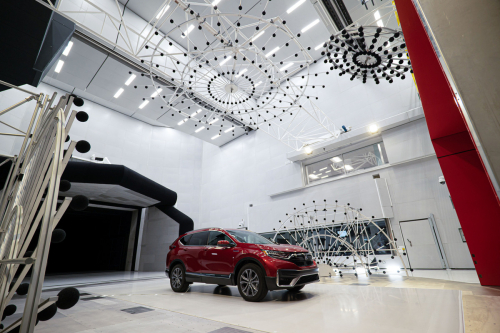 With electrification, noise reduction becomes an even more important element in vehicle design. Absent engine and exhaust sounds, wind noise will be more noticeable inside the cabin of an electric vehicle. Using the acoustic test system, Honda engineers will be able to identify the precise locations of both interior and exterior noise issues more quickly than ever before.

The new wind tunnel, coupled with the company’s advanced safety research center, provides Honda’s R&D engineers with two world-class facilities in Ohio; both supporting the design and development of products built in America using domestic and globally sourced parts. This also is an opportunity for Honda engineers to build relationships with other companies interested in aerodynamic and aeroacoustic research, support STEM activities, and sustain the general aerodynamic community’s testing needs.

Additionally, the wind tunnel’s aerodynamic test capabilities will help increase the range and performance of the company’s future full-electric vehicles.

The HALO wind tunnel is Honda’s latest major investment in Ohio, where the company has been advancing its ability to develop and build products for over 40 years—now totaling $14 billion.